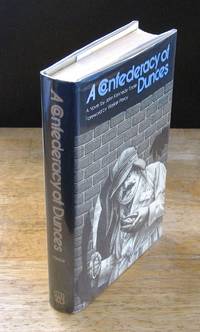 Baton Rouge and London: Louisiana State University Press, 1980. True first edition; 1980 at title page and copyright pages without additional printings stated. One of only 2,500 of the first printing. Tan full cloth boards, black stylized spine titles, light shelf wear. Pages generally near fine, no writing; few at front with little discoloration at edge. Bind fine, square; hinges intact. Dust wrapper, moderate shelf wear, rub; unclipped 12.95, protected in new clear sleeve. First state wrapper, without Chicago Sun-Times blurb, and Walker Percy summmary review at rear panel. Rare near fine first edition in same first state wrapper. Includes original hand written signed letter and play-list by Thelma Ducoing Toole dated February 7, 1982. Beautifully composed message contains songs for the seasons and 'nostalgic' songs. One of which written by Thelma Toole entitled "New Orleans" and another "Everywhere You Go" for her son, John Kennedy Toole. Original envelope w/New Orleans post office stamp features Thelma's address label and the American flag 20 cent stamp of the time. Letter has been folded twice and once more vertically. It was through Thelma Toole's great efforts that her late son's satirical novel was finally posthumously published with assistance from professor and author Walker Percy. The unique satire soon garnered much acclaim and then the Pulitzer, twelve years after her son took his life in despair from rejection of this very novel. He did this at 31 years of age in 1969 after facing consistent rejection from nearly every American publisher. "A masterwork of comedy... pungent slapstick, satire and intellectual incongruities... make for a grand comic fugue!" - NYT. Presented here is "a great slob of a man in violent revolt against the entire twentieth century!" This book's unusual path to success began in 1976 when John Kennedy Toole's mother Thelma, using a walker, hobbled into the office of novelist Walker Percy at Loyola University. She was followed by a chauffeur carrying a manuscript that she told Mr. Percy was a ''masterpiece''. Percy reluctantly agreed to read it. He became entranced as he read, and decided that the novel was ''a major achievement, a huge comic-satiric-tragic one-of-a-kind rendering of life in New Orleans.'' After several more publishers rejected the book, Louisiana State University Press agreed to take a chance with a first printing of only 2,500. The soon to be Pulitzer Prize winner went on to 50,000 copies in hard cover and nearly 600,000 in paperback within three years. Manufactured in the United States of America. 338 pages. Insured post.. Signed by Author's Mother. First Edition. Hardcover. Fine/Very Good. Illus. by Lindlof, Ed (Wrapper Illustration). 8vo - over 7¾ - 9¾" Tall.

A Confederacy of Dunces is a picaresque novel written by John Kennedy Toole, published in 1980, 11 years after the author's suicide. The book was published through the efforts of writer Walker Percy (who also contributed a revealing foreword) and Toole's mother Thelma Toole, quickly becoming a cult classic, and later a mainstream success. Toole posthumously won the Pulitzer Prize for Fiction in 1981. It is an important part of the 'modern canon' of Southern literature.

One of the most built up novels of all time - while it didn't fall flat on its face by any means, the build up ruins it. Extremely funny at times, but impossibly uneven. If no one has ever told you it's the best book ever, give it a try.

spine
The outer portion of a book which covers the actual binding. The spine usually faces outward when a book is placed on a shelf.... [More]
New
A new book is a book previously not circulated to a buyer. Although a new book is typically free of any faults or defects,... [More]
blurb
The blurb refers to the commentary that appears on the dust jacket flaps or the rear of the dustjacket. In the case of... [More]
shelf wear
Shelf wear (shelfwear) describes damage caused over time to a book by placing and removing a book from a shelf. This damage is... [More]
First Edition
In book collecting, the first edition is the earliest published form of a book. A book may have more than one first edition in... [More]
fine
A book in fine condition exhibits no flaws. A fine condition book closely approaches As New condition, but may lack the... [More]
first state
used in book collecting to refer to a book from the earliest run of a first edition, generally distinguished by a change in some... [More]
Cloth
"Cloth-bound" generally refers to a hardcover book with cloth covering the outside of the book covers. The cloth is stretched... [More]
title page
A page at the front of a book which may contain the title of the book, any subtitles, the authors, contributors, editors, the... [More]