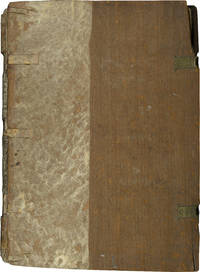 RENAISSANCE COPY OF BOETHIUS'S CONSOLATION OF PHILOSOPHY IN ITS ORIGINAL BINDING. In Latin, manuscript on paper, Italy (Venice?), c. 1475-1500. Dimensions 210 x 140 mm, 70 paper folios, complete, two watermarks, vertical catchwords, ruled in lead, prose in one column, verse sometimes in two, written in an experienced Italian humanist minuscule, blank spaces and cue letters left for initials. BINDING: CONTEMPORARY ITALIAN BINDING of bare (beech?) wood boards with beveled edges, remnant of leather formerly pasted across spine and partially covering boards, original brass clasps inset on front cover. TEXT: The most widely copied work of medieval secular literature, Boethius's Consolation of Philosophy is nevertheless relatively rare on the market. This volume, lacking the gloss found in many contemporary manuscripts which marks them as schoolbooks, was perhaps copied for the humanist scribe's own use. PROVENANCE: Based on its humanist minuscule and watermarks, this manuscript was produced by a single experienced hand in Northern Italy, probably Venice, in the last quarter of the fifteenth century; large detailed manicula (pointing hand) on f. 3 added by a contemporary hand; early modern reader added a border of jagged scribbles around the textblocks of ff. 8v and 24v; inexpert hand adds "Jacopi – che qui anno 1693 i Viterbo 1693" in runny ink on f. 29v, presumably a later unidentified owner, placing the manuscript in Viterbo; an undeciphered three-word note in nineteenth-century German kurrent script on pastedown (meaning is unclear), suggesting a period of German ownership. CONDITION: wear on opening edges, rodent damage on f. 46, minor water damage throughout but no loss or damage of text, flecking occasionally throughout, back pastedown missing, front board of binding chipped above top clasp and split at bottom below lower clasp, otherwise in good condition. Full description and images available. (TM 1004)

spine
The outer portion of a book which covers the actual binding. The spine usually faces outward when a book is placed on a shelf....[more]
edges
The collective of the top, fore and bottom edges of the text block of the book, being that part of the edges of the pages of a...[more]
A.N.
The book is pristine and free of any defects, in the same condition as ...[more]
beveled
Beveled edges, or beveled boards, describe a technique of binding in which the edges of book boards have been cut into slanted...[more]