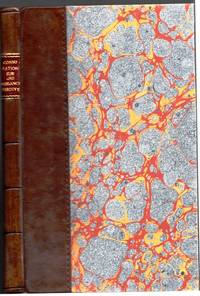 Paris,: Jean-Thomas Herissant, Imprimeur du Roi,, 1765.. iv, [5]-134, [ii blank], 7, [i blank] pp. Small 8vo (12,5 x 19,5 cm.). Finely rebound in half marbled calf (antique style), spine gilt lettered on red morocco label, marbled boards and new endpapers, red edges. A fine copy of this rare obstetrical polemic. The last 7 pages are: "Mémoire a consulter Pour les Héritiers de la Veuve de Charles...". "Bouvart, physician and doctor regent of the faculty of Paris, and associate-veteran of the Academy of Science, was born a Chartres. Many of his ancestors having been physicians, he determined on the same profession, which he practised at Paris with so much success that no other physician was more consulted; yet this did not prevent him being jealous of Tronchin, Bordeu, and some others, of whom he spoke very illiberally, but he was a man otherwise of great kindness and benevolence. One anecdote is recorded as characteristic. A banker, who had experienced some heavy losses, was taken ill, and Bouvart, who was called in, suspected that his weighed on his mind, but could not obtain the secret from him. The banker's wife, however, was more communicative, and told him that her husband had a payment of twenty thousand livres to make very shortly, for which he was unprovided. Bou

Seller rating:
This seller has earned a 5 of 5 Stars rating from Biblio customers.
Biblio.com member since 2012
Schilde
Ask Seller a Question

Fine and rare books in the fields of science, medicine, technology and the applied arts. Old fashioned printed catalogues and lists available on request.A note on binding conservation. All our ancient leather bindings are carefully cleaned with Brecknell's leather soap, and when needed, treated with hydroxypropylcellulose (in the case of dry leather). Finally we protect the leather with \"Cire 213\", the ultimate binding conservation wax developed by the BNF (Bibliothque nationale de France).

edges
The collective of the top, fore and bottom edges of the text block of the book, being that part of the edges of the pages of a... [More]
Marbled boards
... [More]
spine
The outer portion of a book which covers the actual binding. The spine usually faces outward when a book is placed on a shelf.... [More]
morocco
Morocco is a style of leather book binding that is usually made with goatskin, as it is durable and easy to dye. (see also... [More]
fine
A book in fine condition exhibits no flaws. A fine condition book closely approaches As New condition, but may lack the... [More]
rebound
A book in which the pages have been bound into a covering replacing the original covering issued by the publisher.
New
A new book is a book previously not circulated to a buyer. Although a new book is typically free of any faults or defects, "new"... [More]
gilt
The decorative application of gold or gold coloring to a portion of a book on the spine, edges of the text block, or an inlay in... [More]
calf
Calf or calf hide is a common form of leather binding. Calf binding is naturally a light brown but there are ways to treat the... [More]