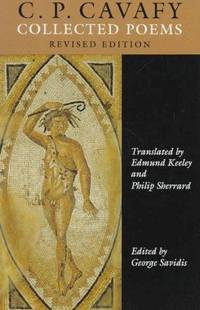 An extraordinary literary event: the simultaneous publication of a brilliant and vivid new rendering of C. P. Cavafy’s Collected Poems and the first-ever English translation of the poet’s thirty Unfinished Poems, both featuring the fullest literary commentaries available in English—by the acclaimed critic, scholar, and award-winning author of The Lost. No modern poet brought so vividly to life the history and culture of Mediterranean antiquity; no writer dared break, with such taut energy, the early-twentieth-century taboos surrounding homoerotic desire; no poet before or since has so gracefully melded elegy and irony as the Alexandrian Greek poet Constantine Cavafy (1863–1933). Now, after more than a decade of work and study, and with the cooperation of the Cavafy Archive in Athens, Daniel Mendelsohn—a classics scholar who alone among Cavafy’s translators shares the poet’s deep intimacy with the ancient world—is uniquely positioned to give readers full access to Cavafy’s genius. And we hear for the first time the remarkable music of his poetry: the sensuous rhymes, rich assonances, and strong rhythms of the original Greek that have eluded previous translators. The more than 250 works collected in this volume, comprising all of the Published, Repudiated, and Unpublished poems, cover the vast sweep of Hellenic civilization, from the Trojan War through Cavafy’s own lifetime. Powerfully moving, searching and wise, whether advising Odysseus as he returns home to Ithaca or portraying a doomed Marc Antony on the eve of his death, Cavafy’s poetry brilliantly makes the historical personal—and vice versa. He brings to his profound exploration of longing and loneliness, fate and loss, memory and identity the historian’s assessing eye as well as the poet’s compassionate heart. With its in-depth introduction and a helpful commentary that situates each work in a rich historical, literary, and biographical context, this revelatory new translation, together with The Unfinished Poems, is a cause for celebration—the definitive presentation of Cavafy in English. Daniel Mendelsohn’s reviews and essays on literary and cultural subjects appear regularly in numerous publications, including The New Yorker and The New York Review of Books. His previous books include the memoir The Elusive Embrace, a New York Times Notable Book and a Los Angeles Times Best Book of the Year, and the international best seller The Lost: A Search for Six of Six Million, which won the National Book Critics Circle Award, the Prix Médicis, and many other honors. Mr. Mendelsohn is also the recipient of a Guggenheim Fellowship, the National Book Critics Circle Citation for Excellence in Reviewing, and the George Jean Nathan Award for Dramatic Criticism. He teaches at Bard College.

(1) PAYMENT: MC, Visa, Cash, Check, Paypal. Payment due within 10 days of order. (2) POST: Priority with delivery confirm $7.50 domestic, Media $5.00, more for larger books & sets, foreign countries calculated at point of sale. (3) RETURNS: Books returnable if not as described within 7 days of receipt. (4) DISCOUNTS: We discount reciprocally to fellow dealers with open shops or online searchable inventory. (5) CONTACT: email commoncrowbooks@gmail.com - we respond within 24 hours. THANKS FOR YOUR ORDERS!!

Seller rating:
This seller has earned a 4 of 5 Stars rating from Biblio customers.
Biblio.com member since: 2005
Pittsburgh, Pennsylvania
Ask Seller a Question

Common Crow's warehouse has around 75,000 books online. We specialize in unusual books in the humanities including poetry, philosophy, history, literature and art.

fine
A book in fine condition exhibits no flaws. A fine condition book closely approaches As New condition, but may lack the...[more]
shelfwear
Minor wear resulting from a book being place on, and taken from a bookshelf, especially along the bottom edge.
Cloth
"Cloth-bound" generally refers to a hardcover book with cloth covering the outside of the book covers. The cloth is stretched...[more]
tight
Used to mean that the binding of a book has not been overly loosened by frequent use.
octavo
Another of the terms referring to page or book size, octavo refers to a standard printer's sheet folded four times, producing...[more]