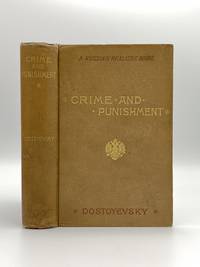 New York: Thomas Y. Crowell, 1886. A fresh, bright copy with skillful restoration at ends of spine, internally clean and fresh. 8vo. 456 pages. Portrait frontispiece of the author; one-page publisher's advertisement at end, with this work listed first and priced $1.50. Publisher's tan cloth stamped in maroon and gilt. First American edition, an unusually fine copy of a scarce book commonly found in worn and frayed condition, and rarely so bright. There is no priority between this and the first English edition (Vizitelly, London) which carries the same translation and is printed from the same setting. Though uncredited in the book, the translation was made by Frederick Whishaw, a Russian-born British novelist, poet and musician. He translated a number of works by Dostoevsky in the 1880a which were published by Henry Vizetelly in London and Crowell in New York. See Maurice Beebe and Christopher Newton, "Dostoevsky in English: A Selected Checklist of Criticism and Translations." Modern Fiction Studies, vol. 4, no. 3, 1958, pp. 271-291. Crowell's American edition seems to be so scarce that it eluded their census of editions.

Indeed it so scarce that WorldCat/OCLC locates only nine copies in institutions (U of Chicago, U of Illinois, Mississippi, Mohawk Valley, NY Public, U of New Mexico, U of Sci & Tec, Virginia, and VMI), and these include imperfect, defective, and rebound copies. Either of the first editions in English are scarce at best, and exponentially so in this condition. Line, Bibliography of Russian Literature in English Translation to 1945.

Crime and Punishment is a novel by Russian author Fyodor Dostoyevsky that was first published in the literary journal The Russian Messenger in twelve monthly installments in 1866. It was later published in a single volume. It is the second of Dostoevsky's full-length novels after he returned from his exile in Siberia, and the first great novel of his mature period. Crime and Punishment focuses on the mental anguish and moral dilemmas of Rodion Romanovich Raskolnikov, an impoverished St.

We properly wrap and pack all books and ship in cardboard boxes or mailers. All items are guaranteed as described and are returnable within 30 days. Please e-mail orders@riverrunbooks.com or call (914) 478-1339 to initiate your return. In your e-mail, please include your name, item(s), and reason for return.

spine
The outer portion of a book which covers the actual binding. The spine usually faces outward when a book is placed on a shelf.... [More]
rebound
A book in which the pages have been bound into a covering replacing the original covering issued by the publisher.
fine
A book in fine condition exhibits no flaws. A fine condition book closely approaches As New condition, but may lack the... [More]
Cloth
"Cloth-bound" generally refers to a hardcover book with cloth covering the outside of the book covers. The cloth is stretched... [More]
gilt
The decorative application of gold or gold coloring to a portion of a book on the spine, edges of the text block, or an inlay in... [More]