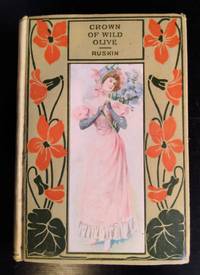 This is what I believe is a first Hurst edition of Crown of Wild Olive, a collection of three lectures by the English critic and philosopher John Ruskin (1819-1900).

Around 1905, Hurst & Company (New York) began publishing best-selling books with beautifully illustrated covers. This is one of those books. It is undated, but the original owner signed the front endpaper and dated it 1912. She also wrote little snippets of poems and sayings on four of the 16 back endpapers.

At page 209, the spine is pulling away a little.

There's a small ink mark on the back cover.

Other than that, this book is in perfect condition.