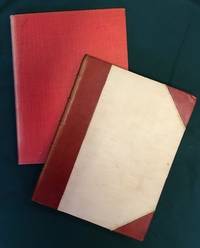 London: Golden Cockerel Press, 1936. A near fine set of the two volumes in interesting and scarce variant binding, This was artist William Rothenstein's copy (1872-1945) with his distinctive signature to fep and his bookplate laid in, together with a slip presenting it with "the compliments of TE Lawrence's executors". Volume I bound in full red cloth, gilt title and cockerel to spine teg by Sangorski and Sutcliffe, obviously for the executors: Volume I was published prior to the second volume, The Thesis (56pp); II The Letters (62pp). Volume II in the standard quarter leather bound by S&S. Photographs and facsimile reproductions of maps, drawings etc. Half morocco with cloth sides Top edges gilt. Laid in is the essential pocket with the two maps. The thesis on military architecture of the crusading kingdoms, submitted in 1910 the original title was "The influence of the Crusades on European military architecture -- to the end of the XIIth Century". by T.E. Lawrence (Lawrence of Arabia), together with a volume of his letters regarding his visits to castles as a young man. This was published shortly, in fact a year plus 1 day, after Lawrence's death in 1935 by arrangement with his brother A.W. Lawrence. "Printed and published in Great Britain by Christopher Sandford, Francis J. Newbery, and Owen Rutter at the Golden Cockerel Press, 10 Staple Inn, London, and completed on the 20th May 1936. The edition is limited to 1000 numbered copies printed in Perpetua type on British mould-made paper. Two volumes. Maps are clean with no chips, no tears. Altogether a nice set of this scarce Lawrence item. See, A History of the Golden Cockerel Press, Cave & Manson for further details regarding the publication. Laid in is a copy of Elkin Mathews Ltd Memorial Catalogue of the Library of William Rothenstein, September 1954, that includes this particular book. Sir William Rothenstein was an English painter, printmaker, draughtsman, lecturer, and writer on art and friend of T.E. Lawrence who prepared a number of portraits of Lawrence... First Limited Edition. Hardback. Very Good. 4to - over 9¾" - 12" tall. Private Press.

Seller rating:
This seller has earned a 5 of 5 Stars rating from Biblio customers.
Biblio.com member since: 2018
Wakefield, West Yorkshire
Ask Seller a Question

At Rickaro Books, we have over 30 years experience in bookselling and customer care. We have a retail shop located in the historic town of Horbury and whilst we sell online, we always welcome visitors to the shop.We specialise in T.E. Lawrence (Lawrence of Arabia) but also carry a wide range of other titles across the fields of military, local history and first edition fiction. if you are seeking for a particular title, we are happy to assist and are always interested in purchasing good, collectable books.

edges
The collective of the top, fore and bottom edges of the text block of the book, being that part of the edges of the pages of a...[more]
Cloth
"Cloth-bound" generally refers to a hardcover book with cloth covering the outside of the book covers. The cloth is stretched...[more]
morocco
Morocco is a style of leather book binding that is usually made with goatskin, as it is durable and easy to dye. (see also...[more]
gilt
The decorative application of gold or gold coloring to a portion of a book on the spine, edges of the text block, or an inlay in...[more]
spine
The outer portion of a book which covers the actual binding. The spine usually faces outward when a book is placed on a shelf....[more]
facsimile
An exact copy of an original work. In books, it refers to a copy or reproduction, as accurate as possible, of an original...[more]
bookplate
Highly sought after by some collectors, a book plate is an inscribed or decorative device that identifies the owner, or former...[more]
fine
A book in fine condition exhibits no flaws. A fine condition book closely approaches As New condition, but may lack the...[more]