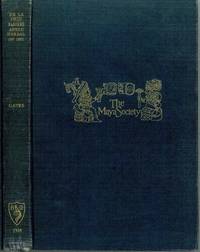 xxxii+144 pages, with reproductions from the codex (many in color), and index. Octavo (8 ¾ “ x 6 ½ ”) issued in blue buckram with gilt lettering to spine. From the library of George M Foster. . 1st edition in English.

This volume contains the full text, in English, with all the figures of the plants, as found in the original manuscript, which as Codex Barberini, Latin 241, has remained in the Library and archives of the Vatican since the time of that Cardinal Barberini from whom it holds it Vatican reference number, and of whose interest in the many forms of natural history has come down to us. The manuscript was prepared as a tribute to the son of the then Vicory of Mexico, in 1552, by Martin de la Cruz and Juan Badiano. Originaly this was to be printed as one of the first publications of the Maya Society. This was first published as number 22 of the Society in 1938, but was published in Latin. This, number 23, is the English traslationg of the Latin version.

Foster’s stamp on title and date of acquiry (10/17/44) on front paste down, light extremity wear, some underlining by Foster in the index else a very good copy.

gilt
The decorative application of gold or gold coloring to a portion of a book on the spine, edges of the text block, or an inlay in...[more]
spine
The outer portion of a book which covers the actual binding. The spine usually faces outward when a book is placed on a shelf....[more]
octavo
Another of the terms referring to page or book size, octavo refers to a standard printer's sheet folded four times, producing...[more]
buckram
A plain weave fabric normally made from cotton or linen which is stiffened with starch or other chemicals to cover the book...[more]