Home Bookbarn International The Cure For Death By Lightning 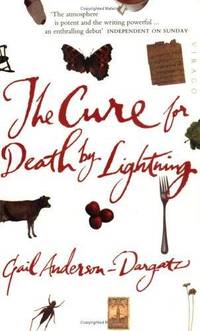 The Cure For Death By Lightning

The Cure For Death By Lightning

Gail Anderson-Dargatz, whose fictional style has been coined as “Pacific Northwest Gothic” by the Boston Globe , has been compared by critics to John Steinbeck, William Faulkner, Flannery O’Connor, Margaret Atwood, Alice Munro, Salman Rushdie and Gabriel García Márquez. Her novels have been published worldwide in English and in many other languages. A Recipe for Bees and The Cure for Death by Lighting were international bestsellers, published worldwide in English and in many other languages, and were both short-listed for the prestigious Giller Prize in Canada. The Cure for Death by Lightning won the UK’s Betty Trask Prize among other awards. A Rhinestone Button was a national bestseller in Canada and her first book, The Miss Hereford Stories , was short-listed for the Leacock Award for humour. Her mother, who also wrote, instilled literary confidence in Gail, so that by the age of eighteen, Gail knew she wanted to be the next Margaret Laurence, writing about Canadian women in rural settings. "Laurence's interest in them made me feel that their and my experience was important." In her early twenties, the future author got a job as a reporter for her hometown paper, the Salmon Arm Observer , but continued to enter her fiction in competitions, and she started to win. One submission caught the attention of the writer Jack Hodgins, who encouraged her to enroll in his course at the University of Victoria. She graduated from there with a B.A. in creative writing. Gail's literary career began to take off when she won first prize in the CBC Literary Competition for a story taken from an early draft of her first novel, The Cure for Death by Lightning . When a Toronto literary agent took her on she already had a short story collection ready to go: The Miss Hereford Stories . Set in the 1960s in the fictional town of Likely, Alberta, ("what you call a half-horse town") the book, with its cast of colourful eccentrics, was published in 1994 and nominated for the Stephen Leacock Medal for Humour. The Cure for Death by Lightning , her first novel, followed two years later. Saturday Night magazine has said that the inclination to write about rural characters sets Anderson-Dargatz apart from many writers of her generation, who tend towards urban fiction. What does she find so fascinating about small-town and country life? "Once you step off the concrete, life stops being abstract and starts being very real, very immediate, very fundamental and very sensual." On this topic, the Financial Post said, “Anyone who thinks rural characters in Canadian fiction are dull and bland should pick up one of Gail Anderson-Dargatz’s novels. … The only certainty in her world view is that anything can, and very often does, happen.” Although she is influenced by Margaret Laurence, Alice Munro, her mentor Jack Hodgins and favourite writers such as Toni Morrison, she says her inspiration comes “from the people and landscapes around me more than from other books." Her style has been called "Margaret Laurence meets Gabriel García Márquez" because her writing tends towards magic realism, but she says the ghosts and premonitions in her writing arise from family stories of the Thompson-Shuswap region, which she carefully transcribed. "My father passed on the rich stories and legends about the region I grew up in, which he heard from the interior Salish natives he worked with. And my mother told me tales of her own premonitions, and of ghosts, eccentrics and dark deeds that haunted the area." Gail Anderson-Dargatz has just recently returned home to the Thompson-Shuswap region found in so much of her writing, and she currently teaches advanced novel and advanced fiction in the Creative Writing MFA program at the University of British Columbia. From the Hardcover edition.

Ships from the UK within 24 hours. EXPEDITED UK DELIVERY AVAILABLE. 30 day return guarantee, with full refund including original shipping costs for up to 30 days after delivery if an item arrives misdescribed or damaged.

Seller rating:
This seller has earned a 4 of 5 Stars rating from Biblio customers.
Biblio.com member since: 2015
Bristol, Somerset
Ask Seller a Question

Bookbarn International have been finding new ways to connect a global community of book lovers with their next favourite read since the year 2000 from our 'barn' in Somerset. We are a top rated seller supported by fantastic feedback ratings and a speedy delivery service. We house a vast range of titles spanning thousands of topics from favourite authors and bestsellers to academic textbooks and classics. We also offer a huge selection of Rare, Antiquarian and Collectible titles. Thousands of new titles are added daily and are carefully checked by our booksellers. We look forward to fulfilling your next book order and if for any reason you are not completely satisfied please let us know. Our fantastic customer service team are here to help.