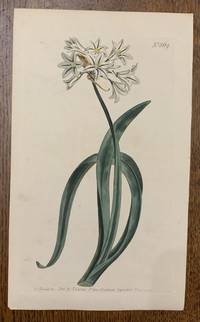 London: T. Curtis, 1805. Very good +. This is a hand colored copper plate engraving. The print measures 5.5 x 9.25 inches, with a plate mark of 4.5 x 7.75. It is a beautiful decorative antique print expertly colored and beautifully composed. This particular plate has been trimmed at the rough edge.

Curtis' work was the first study of British flora, and artists contributing to the opus included James Sowerby, Sydenham Teak Edwards, Francis Sansom and William Kilburn. "The Botanical Magazine; or Flower-Garden Displayed, is an illustrated publication which began in 1787. The longest running botanical magazine, it is widely referred to by the subsequent name Curtis's Botanical Magazine.
Each of the issues contains a description, in formal yet accessible language, and is renowned for featuring the work of two centuries of botanical illustrators. Many plants received their first publication on the pages, and the description given was enhanced by the keenly detailed illustrations.
The first issue, in 1787, was begun by William Curtis, as both an illustrated gardening and botanical journal. Curtis was an apothecary and botanist who held a position at Kew Gardens, who had published the highly praised (but poorly sold) Flora Londinensis a few years before. The publication familiarized its readers with ornamental and exotic plants, which it presented in octavo format. Artists who had previously given over their flower paintings to an affluent audience, now saw their work published in a format accessible by a wider one. The illustrations were initially hand-coloured prints, taken from copper engravings and intended to complement the text. Identification by a general reader was given in exploded details, some of which were given as a section. This was accompanied by a page or two of text describing the plants properties, history, growth characteristics, and some common names for the species.
The first volume's illustrations were mostly by Sydenham Edwards, a dispute with the editors saw his departure to start the rival The Botanical Register. The credit for the first plate (Iris persica) goes to James Sowerby, as did a dozen of Edwards contributions. The first thirty volumes used copper engraving to provide the plates, the hand colouring of these was performed by up to thirty people. An issue might have a circulation of 3000 copies, with 3 plates in each. As costs of production rose, and demand increased, results would be variable within a run. The later use of machine colouring would provide uniformity to the artists work, although the process could not give the same detail for many years. The magazine has been considered to be the premier journal for early botanical illustration." from Wikipedia.

Books are returnable within 10 days by prior arrangement. Please add $4.50 for the first book and 1.00 for each additional book for media rate postage in the US. Priority mail is also available. Books that are larger or multi-volume sets will need addional postage. Other arrangements at cost. Personal & Business checks are welcome as are Mastercard & Visa, and Discover Card.

Seller rating:
This seller has earned a 5 of 5 Stars rating from Biblio customers.
Biblio.com member since 2005
Wilmington, Vermont
Ask Seller a Question

Austin's Antiquarian Books is a used, rare and out of print bookshop located on West Main Street in Wilmington, Vermont. At our shop we have a general stock of approximately 15,000 used, scarce and out-of-print books, with particular strength in American History, especially Theodore Roosevelt the West, Travel, Decorative Arts, Natural History, and Sporting. We also offer a selection of antique maps and prints, historical paper and ephemera.

plate
Full page illustration or photograph. Plates are printed separately from the text of the book, and bound in at production. I.e.,... [More]
octavo
Another of the terms referring to page or book size, octavo refers to a standard printer's sheet folded four times, producing... [More]