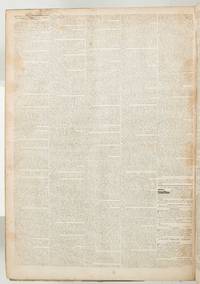 by (CANBY, William and James)

Washington, D.C.: Gales & Seaton, 1868. Hardcover. Good. A collection of 62 bound large folio volumes consisting of 59 volumes of the *Daily National Intelligencer* (published daily except Sunday); and three volumes of the *National Intelligencer* (triweekly edition). Owned and edited by Joseph Gales, Jr., in partnership with his brother-in-law William W. Seaton, the *Intelligencer* provided the nation with accurate and detailed reports of governmental activities (including debates and speeches, President's messages, proclamations, etc.), along with daily articles, reports, editorials, etc, on the most important events and issues of the day. According to *The New York Times* (reporting on an incident during the War of 1812): "... so powerful was its influence that when Gen. Ross, in command of the British troops, entered the capital after the unfortunate affair of Bladensburgh, his first inquiry was not for the Capitol, the President's house, or the departments, but for the *National Intelligencer* office, and it was the first establishment demolished, causing a short cessation in its regular publication." Primarily a political newspaper, the *Intelligencer* served as the voice of the Madison, Monroe, and J. Quincy Adams administrations, and it continued to serve as the voice of the Federal Government until the election of Andrew Jackson, when the newspaper switched to the Whig party. It was printed in four pages (typically five columns to the page). Most other newspapers from throughout the country took their coverage of national politics and government directly from the *Intelligencer*. The collection includes several special reports and speeches issued as supplements, and an extra sheet printing James Madison's President's Message on the threat to the Nation during the War of 1812. Also included is the first newspaper printing of the Monroe Doctrine (December 3, 1823), and the first appearance of Robert Owen's *Discourses on a New System of Society*. The volumes contains a near complete run of daily issues published from January 1, 1813 (Vol. 1, No. 1) up through the end of December 1820 (a total of 17 volumes, lacking only about a dozen single issues); followed by 34 nonconsecutive volumes of daily issues dating from January 1, 1821 through the end of June 1864 (each individual volume contains about six months of daily issues); and a complete run of daily issues published from January 1, 1865 up through the end of December 1868 (a total of eight volumes). Also included is a three-volume complete run of the triweekly edition published from January 7, 1858 up though the end of December, 1860. The collection lacks the years 1850-57, and 1861. All 62 volumes are bound in contemporary half-leather and marbled paper over boards, ranging in size from 13" x 20" to 22" x 27" (as the newspaper was issued in multiple larger formats over this 55-year period). The daily issues are bound chronologically in unnumbered volumes with varying time spans (about six months). Ex-library with small printed bookplates and/or manuscript presentations on the front pastedowns. Several volumes also include binder's tickets. Wear to the leather spines and board edges, most volumes with tears to the spine backs and detached or partially detached boards, a few volumes with intermittent damage to one or two issues at the front or back, overall good or better. The first 47 volumes (spanning the years from 1813-49) bear the gift presentation of William Canby, a prominent Delaware Quaker and friend of Thomas Jefferson. Most of the daily issues from this period have his son's name (James Canby) as the subscriber's name written in manuscript on each daily issue. An historically important and very rare survival, providing contemporary, day-by-day accounts of the nation's most important news and events. A detailed list of the months contained in each volume, along with but a few highlights from among the countless speeches and debates, articles and reports, is available upon request.

New
A new book is a book previously not circulated to a buyer. Although a new book is typically free of any faults or defects,...[more]
folio
A folio usually indicates a large book size of 15" in height or larger when used in the context of a book description....[more]
edges
The collective of the top, fore and bottom edges of the text block of the book, being that part of the edges of the pages of a...[more]
marbled paper
Decorative colored paper that imitates marble with a veined, mottled, or swirling pattern. Commonly used as the end papers or...[more]
spine
The outer portion of a book which covers the actual binding. The spine usually faces outward when a book is placed on a shelf....[more]