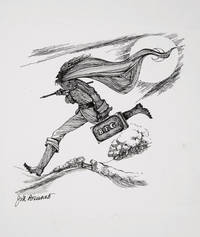 DANNY THE CHAMPION OF THE WORLD Original Artwork.

DANNY THE CHAMPION OF THE WORLD Original Artwork.

Later published in London by Jonathan Cape and Puffin Books and in America by Alfred A. Knopf. 1975. The Jill Bennett archive of illustrations for the first edition of Roald Dahl's Danny The Champion of The World. The Jill Bennett archive of illustrations for the first edition of Roald Dahl's Danny The Champion of The World. Including correspondence between the author, artist and the publishers Jonathan Cape, Alfred A. Knopf and Penguin (Puffin) Books. The illustrations begin with the three fine pencil character studies Jill Bennett sent to Dahl (who forwards them to his publisher) and includes the full colour dustjacket artwork and the 71 original pen and ink drawings (on 66 sheets) used to illustrate the story. Also present is the original photograph (believed to be Roald Dahl as a baby) used at the beginning of chapter one, and the "Sparky" lettering used at the conclusion of the final page. Correspondence includes two autograph letters from Roald Dahl to Jill Bennett, one confirming receipt of the trial drawings, the other confirming the commission and forwarding comments from Knopf's "wizz-kid editor" Bob Gottlieb; two typed letters from Alfred Knopf to Roald Dahl, one returning Jill Bennett's illustrations, the other giving layout measurements and deadlines for the jacket illustration; three typed letters from Kaye Webb at Penguin to Jill, the first sending the manuscript of 'Roald's new book', the second asking for an alternative illustration to the photograph due to concerns about the quality of reproduction and the last enclosing two copies of Danny 'in its Puffin coat'; three typed letters from Robert (Bob) Gottlieb at Alfred Knopf to Jill confirming receipt of the jacket artwork 'which has been hailed a triumph', another enthusing about the Danny pictures and advising that 'our half of your payment was sent out to you some days ago. And I have written strongly to Tom Maschler, urging him to pay his share at once.'; two typed letters from Tom Maschler at Jonathan Cape to Jill, the first enclosing a cheque in payment 'I am delighted with the result and I hope the great British reading public will be equally delighted!', the other forwarding a couple of copies of the Cape first edition and apologising for the delay in doing so; an autograph copy in Jill's hand of a letter from Bob Gottlieb to Roald Dahl approving the trial drawings and setting out the deadlines, illustration requirements and fee amount, and a standard letter from Random House enclosing early reviews of the book. All the above is housed and beautifully presented in two purpose made quarter black morocco solander cases. The publication of Danny The Champion of the World marked a notable turning point for Roald Dahl and his books. Having been published in the UK by George Allen and Unwin, a muddle occurred over the contract for Danny, provoking Dahl to investigate alternative publishers, and, impressed by Tom Maschler's energy, he transferred to Jonathan Cape. For the first time both the UK and US editions were to have the same illustrations. Jill Bennett had just completed the illustrations for the first paperback edition of Fantastic Mr. Fox for Puffin Books, and, delighted with the result, Kaye Webb at Puffin sent her the manuscript for Roald Dahl's new book Danny The Champion of The World. The correspondence retained in the archive clearly shows that all three publishing houses worked together in order to bring the book to print and even though the Puffin edition would be the last to publish, it was Kaye Webb who, with the obvious approval of Roald Dahl, was instrumental in bringing Jill Bennett to the project. In chapter two of Danny we meet for the first time a character who would become one of Dahl's most famous and best loved creations: The BFG. Jill's illustration of the Big Friendly Giant who, "three times as tall as an ordinary man," with "hands as big as wheelbarrows," appears on page 20 of the Jonathan Cape first edition. Dahl's own manuscripts, notebooks and correspondence, including those for Danny, are held at the Roald Dahl Museum in Great Missenden, Buckinghamshire. Manuscript material pertaining to any of his major books is exceedingly rare. To have such a complete archive documenting the illustration process from the initial sight of the manuscript, retaining the three trial sketches, through to the execution and completion of the project, we believe is unique. Further details and images for any of the items listed are available on request. Lucius Books welcomes direct contact with our customers.

Seller rating:
This seller has earned a 5 of 5 Stars rating from Biblio customers.
Biblio.com member since: 2015
York, North Yorkshire
Ask Seller a Question

Our shop is located in central York within a stones throw of the historic Micklegate Bar and walls. We are open seven days a week and carry a high quality stock specialising in but not limited to first editions, signed copies, bound sets and childrens / illustrated books and original art. Our opening times are 10am to 6pm Monday to Saturday and 11am to 4pm on Sundays.Lucius Books is proud to be a full member of the Antiquarian Booksellers Association (ABA) and the International League of Antiquarian Booksellers (ILAB) trade associations. If you are unable to make it to the shop then our stock is available to view on our website at www.luciusbooks.com

New
A new book is a book previously not circulated to a buyer. Although a new book is typically free of any faults or defects,...[more]
fine
A book in fine condition exhibits no flaws. A fine condition book closely approaches As New condition, but may lack the...[more]
morocco
Morocco is a style of leather book binding that is usually made with goatskin, as it is durable and easy to dye. (see also...[more]
First Edition
In book collecting, the first edition is the earliest published form of a book. A book may have more than one first edition in...[more]
jacket
Sometimes used as another term for dust jacket, a protective and often decorative wrapper, usually made of paper which wraps...[more]