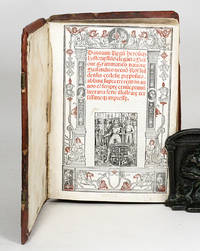 Paris: Iodocus [Josse] Badius Ascensius, 1514. FIRST EDITION. contemporary calf. Very Good. THE VERY RARE FIRST EDITION (1514), EDITIO PRINCEPS, OF SAXO'S HISTORY OF MEDIEVAL DENMARK, CONTAINING THE STORY THAT BECAME SHAKESPEARE'S HAMLET. "The first connected account of the hero whom later ages know as Hamlet is that of Saxo, called Grammaticus, in [the work offered here], written at the end of the twelfth century and first published in 1514" (Harold Jenkins, ed., Introduction to The Arden Shakespeare Edition of the Works of William Shakespeare). "The [1514 editio princeps] of Saxo probably had a political purpose, to strengthen the legitimacy of the young Danish king, Christian II, vis-a-vis his new family-in-law, the Hapsburg dynasty. Saxo's patriotic history of Denmark, written in language which the Renaissance humanists could appreciate, had finally reached a European public, and thus after a long delay it contributed to the reputation of Saxo's country and its kings, exactly as he would have liked" (Karsten Friis-Jensen, ed., Saxo Grammaticus: Gesta Danorum: The History of the Danes). Saxo's preface to his book is charmingly modest: "Because other nations are in the habit of vaunting the fame of their achievements, and joy in recollecting their ancestors, Absalon, archbishop of Denmark, had always been fired with a passionate zeal to glorify our fatherland; he would not allow it to go without some noble document of this kind and, since everyone else refused the task, the work of compiling a history of the Danes was thrown upon me, the least of his entourage; his powerful insistence forced my weak intellect to embark on a project too huge for my abilities" (Peter Fisher's translation, in Friis-Jensen, op. cit.). Yet whatever the deficiencies of the author or the work, Saxo deserves credit for passing on the story that fired Shakespeare's imagination and led him to create what is arguably the greatest play ever written in the English language. "In this primitive and sometimes brutal story the essentials of Shakespeare's plot - fratricide, an incestuous marriage, feigned madness, and the ultimate achievement of a long-delayed revenge - are already present. And it is the kind of potentially dramatic story in which 'carnal, bloody, and unnatural acts' show ' purposes mistook Fall'n on th'inventors' heads' ([Hamlet] v.ii.386-90) The woman who waylays the hero, the man who spies on him in his mother's chamber, and the retainers who escort him to England to be killed already adumbrate the roles of Ophelia, Polonius, and Rosencrantz and Guildenstern... Likenesses do not stop at incidents. In Shakespeare's big set scene between Hamlet and his mother [Act III, sc. 4], the very drift of the dialogue is anticipated in Saxo... Something of Saxo also remains in Hamlet's savage contempt for Polonius's corpse [Act IV, sc. 3]" (Jenkins, op. cit.). Opinions differ on whether Shakespeare ever read Saxo, the majority view being that he did not, and instead got the story indirectly, through the adaptation of it by François Belleforest in his Histoires Tragiques, which first appeared in 1570. Nevertheless, there is some evidence that Shakespeare did at least consult Saxo. For example, Gunnar Sjögren, the Swedish Shakespeare scholar, states that "It is not generally believed that Shakespeare had read Saxo at all. Yet, there are in Hamlet what I take to almost literal, but seemingly unintentional, echoes from Saxo's text which I find otherwise difficult to explain away" (Sjögren, "Hamlet the Dane"). Whatever Shakespeare may have borrowed from Saxo and other sources, the play that survives today is uniquely his own: "Saxo has no ghost demanding vengeance, and the identity of the murderous uncle is known from the start. There is no Osric, no gravediggers or play within a play. The legend lacks a Laertes character and the young woman does not go mad or kill herself. Perhaps most crucially, Amleth lacks Hamlet's melancholy disposition and long self-reflexive soliloquies, and he survives after becoming king" (British Library). Title page with detailed woodcut border; "CP" printed in the central woodcut decoration, likely identifying the editor, Christiern Pederson. Issue "A" (assumed export issue) without inscription printed beneath the central title woodcut. Paris: Iodocus [Josse] Badius Ascensius, 1514. Folio (207x288mm), early (16th-century) elaborately blind-tooled calf over wooden boards, remnants of metal clasps; partial (likely later) paper label, raised bands. Housed in custom linen box with red leather label with gilt title. 208 leaves (including final blank). Boards restored with patches of later leather, spine worn with parts of sewing exposed. A couple spots of restoration to extreme edge of title; restoration to bottom corner of Aaii (not affecting text). "Sum" and "n.A." written in ink on title. Title handsomely written on top edge of text block. Occasional neat underlinings and scholarly notes, some minor marginal wormholes. Overall, text clean with large margins. A beautifully printed book with title in red and black and with highly decorative woodcut initials throughout. THE 1514 FIRST EDITION - PARTICULARLY IN AN EARLY BINDING - IS SCARCE.

calf
Calf or calf hide is a common form of leather binding.  Calf binding is naturally a light brown but there are ways to treat...[more]
raised band(s)
Raised bands refer to the ridges that protrude slightly from the spine on leather bound books.  The bands are created...[more]
leaves
Very generally, "leaves" refers to the pages of a book, as in the common phrase, "loose-leaf pages." A leaf is a single sheet...[more]
spine
The outer portion of a book which covers the actual binding. The spine usually faces outward when a book is placed on a shelf....[more]
title page
A page at the front of a book which may contain the title of the book, any subtitles, the authors, contributors, editors, the...[more]
folio
A folio usually indicates a large book size of 15" in height or larger when used in the context of a book description....[more]
First Edition
In book collecting, the first edition is the earliest published form of a book. A book may have more than one first edition in...[more]
gilt
The decorative application of gold or gold coloring to a portion of a book on the spine, edges of the text block, or an inlay in...[more]
text block
Most simply the inside pages of a book.  More precisely, the block of paper formed by the cut and stacked pages of a...[more]
New
A new book is a book previously not circulated to a buyer. Although a new book is typically free of any faults or defects,...[more]