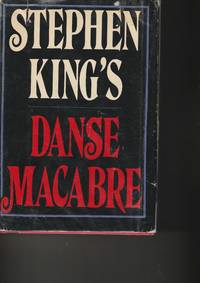 Photo portrait of Stephen King in his 30's on the rear cover.

In the his introduction, King credits Bill Thompson, the editor of his first five published novels, and later editor at Doubleday, as being the inspiration for its creation.

"The concept intrigued and frightened me at the same time."

CONTENTS: Forenote; I October 4, 1957, and an Invitation to Dance; II Tales of the Hook; III Tales of the Tarot; IV An Annoying Autobiographical Pause; V Radio and the Set of Reality; VI The Modern American Horror Movie--Text and Subtext; VII The Horror Movie as Junk Food; VIII The Glass Teat, or, This Monster Was Brought to You by Gainesburgers; IX Horror Fiction; X The Last Waltz--Horror and Morality, Horror and Magic; Afterword; Appendix 1. The Films; Appendix 2.

Danse Macabre is a non-fiction book by the popular horror author, Stephen King. The 1981 publication is about horror fiction in print, TV, radio, film and comics, and the influence of contemporary societal fears and anxieties on the genre.

Pontaccio takes pride in accurate descriptions, careful wrapping and quick shipping. A considerable amount of time and care is taken to produce the clearest, most detailed photographs and descriptions of our books so that the book-buying process is as rewarding and pleasurable as it should be.

Please Note: All shipping costs are based on an average sized book. If an item is both over sized and heavy, there will be an extra charge for Priority Mail or for shipping outside the United States.

Our international "expedited rate" is quoted from USPS Flat rate Priority Envelope rate for that country; therefore, if you order a multi-volume title or a book too large for the envelope, we will contact you after your purchase to let you know what additional shipping charges need to be applied.

Seller rating:
This seller has earned a 5 of 5 Stars rating from Biblio customers.
Biblio.com member since: 2018
KENT, Connecticut
Ask Seller a Question

Copyright page
The page in a book that describes the lineage of that book, typically including the book's author, publisher, date of...[more]
First Edition
In book collecting, the first edition is the earliest published form of a book. A book may have more than one first edition in...[more]

More books like this are on sale from Pontaccio at 20% off!