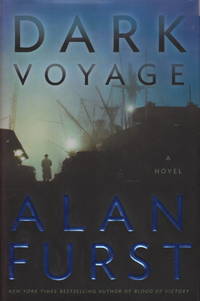 "In the first nineteen months of European war, from September 1939 to March of 1941, the island nation of Britain and her allies lost, to U-boat, air, and sea attack, to mines and maritime disaster, one thousand five hundred and ninety-six merchant vessels. It was the job of the Intelligence Division of the Royal Navy to stop it, and so, on the last day of April 1941 . . ."May 1941. At four in the morning, a rust-streaked tramp freighter steams up the Tagus River to dock at the port of Lisbon. She is the Santa Rosa, she flies the flag of neutral Spain and is in Lisbon to load cork oak, tinned sardines, and drums of cooking oil bound for the Baltic port of Malmo.But she is not the Santa Rosa. She is the Noordendam, a Dutch freighter. Under the command of Captain Eric DeHaan, she sails for the Intelligence Division of the British Royal Navy, and she will load detection equipment for a clandestine operation on the Swedish coast--a secret mission, a dark voyage.A desperate voyage. One more battle in the spy wars that rage through the back alleys of the ports, from elegant hotels to abandoned piers, in lonely desert outposts, and in the souks and cafes of North Africa. A battle for survival, as the merchant ships die at sea and Britain--the last opposition to Nazi German--slowly begins to starve.A voyage of flight, a voyage of fugitives--for every soul aboard the Noordendam. The Polish engineer, the Greek stowaway, the Jewish medical officer, the British spy, the Spaniards who fought Franco, the Germans who fought Hitler, the Dutch crew itself. There is no place for them in occupied France; they cannot go home.From Alan Furst--whom The New York Times calls America's preeminent spy novelist--here is an epic tale of war and espionage, of spies and fugitives, of love in secret hotel rooms, of courage in the face of impossible odds. Dark Voyage is taut with suspense and pounding with battle scenes; it is authentic, powerful, and brilliant.

Do not hesitate to call us at 1-209-274-6960 or email us at chris@bookfever.com if you have any questions or want to confirm availability. FREE gift wrapping upon request. Books are packed carefully, shipped promptly with delivery confirmation and insurance at our expense. We want our customers to be totally satisfied with their purchase and guarantee all of our books to be as described. If for any reason you want to return a book, please contact us within 10 days of receipt of the book. Returned books must be in the same condition as we shipped to you. Reciprocal trade courtesies offered, institutions may request to be invoiced. WANT lists welcomed; we have assisted many collectors and scholars in acquiring books in their area of interest.

Seller rating:
This seller has earned a 5 of 5 Stars rating from Biblio customers.
Biblio.com member since 2003
Ione, California
Ask Seller a Question

This is our 28th year in business. We started selling books in the CompuServe Book Collecting forum in 1993, quite a while before there was any commercial Internet. In 1998 we relocated our main business from Sacramento to the Sierra foothills of Amador County, about 35 miles east of downtown Sacramento and opened a store (called Books Upstairs) at the Antiques Upstairs Mall, 5 Main Street, Jackson, CA. (open every day from 10-5) The emphasis there is on Western Americana, children's books, mysteries, science fiction, and inexpensive reading copies of classics and vintage juvenile series. Please let us know if there are any other books you are looking for; we enjoy helping collectors complete their collection and we can often suggest books for reading! .

title page
A page at the front of a book which may contain the title of the book, any subtitles, the authors, contributors, editors, the... [More]
jacket
Sometimes used as another term for dust jacket, a protective and often decorative wrapper, usually made of paper which wraps... [More]
fine
A book in fine condition exhibits no flaws. A fine condition book closely approaches As New condition, but may lack the... [More]