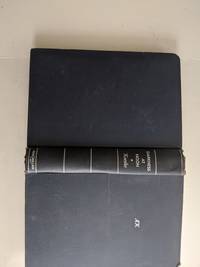 First Edition of this seminal novel on the authoritarian state. ..
Blue cloth over boards with silver lettering on the front (AK) and on the spine. Some fraying at top cover corners and top and bottom of spine; and same age discoloration on the inside covers. Otherwise, no apparent fault; no tears or blemishes.

Darkness at Noon, by Hungarian-born British writer Arthur Koestler, is the tale of Rubashov, an Old Bolshevik who is arrested, imprisoned, and tried for treason against the government that he had helped to create. The novel is understood as an allegory to the USSR in 1938, the Great Purge, and the Moscow Trials. However, the text never mentions the Soviet Union or Russia (just “Country of the Revolution” and “Over There”) or Joseph Stalin (only “Number One,” a menacing dictator). Perhaps the lack of specific references is Koestler’s way of making the story seem more universal, but it’s clear he has in mind actual places, people, and events. Koestler was actually a proponent of Marxism-Leninism until Stalin’s 1938 Purge and the signing of the Nazi-Soviet pact. Afterwards, he edited an anti-Hitler, anti-Stalin newspaper. Koestler wrote the novel in German while living in Paris, from where he escaped in 1940 just before the Nazi troops arrived. Darkness at Noon owes its publication to the decision of sculptor Daphne Hardy, Koestler’s lover in Paris, to translate the text into English before she herself escaped. Koestler wrote Darkness at Noon as the second part of a trilogy; the first volume is The Gladiators (1939), first published in Hungarian. It is a novel about the subversion of the Spartacus revolt. The third novel is Arrival and Departure (1943), about a refugee during World War II. By then living in London, Koestler wrote the third in English. In 1998, the Modern Library ranked Darkness at Noon number eight on its list of the 100 best English-language novels of the 20th century. Sidney Kingsley adapted it for Broadway in 1951.

Seller rating:
This seller has earned a 5 of 5 Stars rating from Biblio customers.
Biblio.com member since 2020
Washington, District of Columbia
Ask Seller a Question

Cloth
"Cloth-bound" generally refers to a hardcover book with cloth covering the outside of the book covers. The cloth is stretched... [More]
spine
The outer portion of a book which covers the actual binding. The spine usually faces outward when a book is placed on a shelf.... [More]