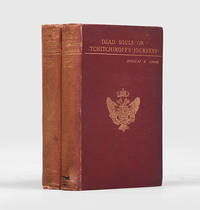 Dead Souls,: or Tchitchikoff's Journeys. Translated from the Russian by Isabel F. Hapgood.

London: John and Robert Maxwell,, [1887]. First appearance titled Dead Souls 2 volumes, octavo. Original red cloth, spines lettered in gilt, covers blocked in gilt and blind. Monogram booklabels - "E.H.C.F" - to front pastedowns; faint pencil signature of Dennis Smith to front free endpapers. Spines a little sunned and soiled with a small chip to vol. II, light wear to extremities, hinges just beginning to split, light abrasion to front free endpaper of volume I. A very good copy. First complete edition in English, and the first under this title, UK issue from the US sheets with a cancel title page (the US sheets published by T. Y. Crowell, New York, 1886). The novel first appeared in English in 1854 under the title Home Life in Russia, but that was an adaptation of part one only, with an altered ending. Isabel Florence Hapgood's (1851-1928) translations from the Russian "were numerous and in their day influential... She was one of the early translators of Gogol and Tolstoy, and it is a sign of the popularity of things Russian that her versions of Gogol's Dead Souls and Taras Bulba were immediately reissued without acknowledgement by the enterprising publisher Vizetelly, who contented himself with having them slightly revised" (Oxford History of Literary Translation in English, vol. IV, p. 315). The pirated edition of Vizetelly was published a month after the UK issue of the first edition, and the two should not be confused. Dead Souls was first published in Moscow in 1852 under the censor-imposed title The Adventures of Chichikov, and told the story of a middling gentleman intent on raising his social standing by buying the names of deceased serfs from landowners in order to commit fraud. Gogol's original intention was to publish a further two parts mimicking the structure of the Divine Comedy. In the second part Chichikov would experience a moral transformation corresponding to purgatory, but Gogol burned the manuscript shortly before his death. Bibliography of Russian Literature in English Translation, p. 19.

Dead Souls by Nikolai Gogol, Russian writer, was first published in 1842, and is one of the most prominent works of 19th-century Russian literature. Gogol himself saw it as an "epic poem in prose", and within the book as a "novel in verse". Despite supposedly completing the trilogy's second part, Gogol destroyed it shortly before his death. Although the novel ends in mid-sentence, it is usually regarded as complete in the extant form.

gilt
The decorative application of gold or gold coloring to a portion of a book on the spine, edges of the text block, or an inlay in...[more]
New
A new book is a book previously not circulated to a buyer. Although a new book is typically free of any faults or defects,...[more]
Cloth
"Cloth-bound" generally refers to a hardcover book with cloth covering the outside of the book covers. The cloth is stretched...[more]
First Edition
In book collecting, the first edition is the earliest published form of a book. A book may have more than one first edition in...[more]
soiled
Generally refers to minor discoloration or staining.
sunned
Damage done to a book cover or dust jacket caused by exposure to direct sunlight.  Very strong fluorescent light can cause...[more]
octavo
Another of the terms referring to page or book size, octavo refers to a standard printer's sheet folded four times, producing...[more]
title page
A page at the front of a book which may contain the title of the book, any subtitles, the authors, contributors, editors, the...[more]