Home Phillip J. Pirages Fine Books and Medieval Manuscripts THE DESCENT OF MAN. [with] ON THE ORIGINS OF SPECIES 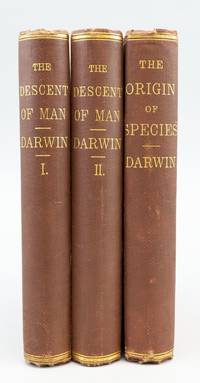 THE DESCENT OF MAN. [with] ON THE ORIGINS OF SPECIES

THE DESCENT OF MAN. [with] ON THE ORIGINS OF SPECIES

New York: D. Appleton and Co, 1871, 1872. First American Edition of "Descent" (with first use of the word "evolution" by Darwin); Fifth Edition of "Origin.. 203 x 121 mm. (8 x 5"). All volumes with ads at the end. Two separately published works in three volumes. Publisher's brown buckram, covers with black-stamped frames, flat spines with gilt titling, "Origin" with a leaves uncut in a couple of places. Descent with 76 illustrations in the text; "Origin" with folding diagram. Front free endpaper of all three volumes with pencilled signature of L. G. Andrews. Freeman 941, 394. Tiny tear to head of one spine, one corner slightly bumped, extremities lightly rubbed, a little chafing to a couple of boards, one page with faint printing smudges, other trivial internal imperfections, but FINE COPIES, internally clean and fresh, in sound bindings with few signs of use. The first edition of "Descent of Man" is especially notable for Darwin's first use of the word now virtually synonymous with his name: "evolution" appears on p. 2 of volume I, noting the opposition of some older scholars of natural science to his theory of natural selection. Darwin considered "descent" a continuation of the other work here, his ground-breaking "Origin of Species," with special focus on man's descent from ape-like creatures. As DNB notes, "'Descent' of Man brought the full force of evolutionary proposals directly into the heart of ordinary Victorian life." Another area of controversy in "Descent" was Darwin's theory on sexual selection, which he used to explain physical characteristics more aesthetic than functional, such as the male peacock's splendid tail, the male hummingbird's iridescence, and the male human's beard--all features that might give the possessor advantage in the attraction of a mate. Widely considered the most important biological book ever written, "Origin" went through six revised editions following its first appearance in 1859, with our fifth edition marking Darwin's first use of Herbert Spencer's phrase "survival of the fittest" to describe natural selection. Our copy has never been read all the way through--a couple of leaves that remained uncut by the binder are still attached, and no one has attempted to open them. Copies of these editions appear on the market from time to time, but not often in the little-used condition seen here.

(US)
Bookseller Inventory #
CBJ1801
Title
THE DESCENT OF MAN. [with] ON THE ORIGINS OF SPECIES
Author
DARWIN, CHARLES
Book condition
Used
Quantity available
1
Edition
First American Edition of "Descent" (with first use of the word
Publisher
D. Appleton and Co
Place of Publication
New York
Date published
1871, 1872
Note
May be a multi-volume set and require additional postage.

buckram
A plain weave fabric normally made from cotton or linen which is stiffened with starch or other chemicals to cover the book...[more]
leaves
Very generally, "leaves" refers to the pages of a book, as in the common phrase, "loose-leaf pages." A leaf is a single sheet...[more]
fine
A book in fine condition exhibits no flaws. A fine condition book closely approaches As New condition, but may lack the...[more]
First Edition
In book collecting, the first edition is the earliest published form of a book. A book may have more than one first edition in...[more]
spine
The outer portion of a book which covers the actual binding. The spine usually faces outward when a book is placed on a shelf....[more]
tail
The heel of the spine.
gilt
The decorative application of gold or gold coloring to a portion of a book on the spine, edges of the text block, or an inlay in...[more]
G
Good describes the average used and worn book that has all pages or leaves present. Any defects must be noted. (as defined...[more]