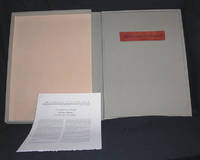 Description of a Masque

Description of a Masque

New York. Limited Editions Club. 1998. Bound in Taupe linen over boards. Black titled grain morocco label to front cover. Encased in a like bound, ultra-suede lined Solander box with grain morocco label to spine. Folio. 12.25" x 16.25". This Edition Limited to 300 numbered copies, of which this is #142. Signed by Ashbery and Freilicher to Colophon.  Illustrated with three woodblock prints by Kenji Shinohara from original paintings commissioned for this Edition by Jane Freilicher. Printed upon hand-made textured Tosa Hanga Japanese milled paper. John Ashbery (b. 1927) has achieved a unique status among American poets. Even though much of his work is difficult to read, avant-garde, and post-modernist in character, Ashbery has become revered and beloved by many readers. For all the obscurity of his writing, his poetry is tantalizing and inspiring. It properly draws many people into its orbit. Even those who dislike Ashbery's poetry acknowledge its force and importance.Ashbery's stature is demonstrated by, among many other ways, this volume of his Collected Poems from 1956 -- 1987 in the Library of America (LOA) series. Ashbery is the first living poet to be honored with a complete volume in the LOA. A second projected LOA volume will cover Ashbery's poetry subsequent to 1987. The Library of America was founded in 1979 to preserve the best of American writing in uniform, accessible editions. It is a series that celebrates America in poetry, history, fiction, philosophy, travel writing, journalism, and more. Ashbery richly deserves his place in it. Ashbery was born in 1927 and was raised in upstate New York. He attended Harvard and Columbia and lived for ten years (1955 -- 1965) in Paris."Notorious for its opacity, John Ashbery's "Description of a Masque" typifies both the avant-garde's unearthing of some odd precursor and its antipurist experiments with syncretism. It is a postmodernist re-vision of a Renaissance spectacle, where the traditional shifts in medium, backdrop, stage properties, cast, and action extend to elements imported from film and TV. The masque and the imaginary neomasque intersect-first, in their rich allusive poetics and, second, in their equal (if ultimately opposed) commitment to the endless conflict between the visual and the verbal media. However, Ashbery's text operates at a further remove from the evoked phenomena, because it translates the multimedia show into words: as "Description," it verbally re-presents the spectacular representation, often re-re-presents what the masque theater itself re-presents from its multiple sources. This work-length engagement in interart transfers does not just enrich our idea of postmodern ekphrasis, or of the relations between ekphrastic and all-literary allusiveness, or of the yoking together of artistic movements across history. (E.g., the borrowing from an obscure de Chirico ekphrasis interposes an early, surrealistic avant-garde between the Renaissance masque and the postmodern writer.) It also proves crucial to making (narrative, hence also thematic) sense of the protean world and discourse world. Along one line, "Description" thus narrates the metamorphoses of the two divine protagonists: the ever-adaptable Mercury and the resistant Mania. Each alludes simultaneously to more than one incarnation of the mythological figure, sometimes in more than one medium. And sequence joins forces with coexistence to variegate and disunify the self, so that on reappearance the figure looks either transformed altogether or a mixture of earlier and new properties, notably including costume. In either case, language here re-presents the changing features even when already unseen, to signify the dynamism of roles and images and past identities hidden in the visual present. Along a convergent line, "Description" narrativizes the speaking observer of the performance-and exactly when the changes in the imaginary scene are fastest. A close analysis reveals the measures taken here to weaken the visual effect, thereby assimilating the object of description to the belated process of enlightenment. To realize that "the setting would go on evolving eternally" is to discover the existential principle behind the appearances of incessant, even meaningless change. Owing to language, insight outranks and reverses sight." - Yacobi Jane Freilicher (b. 1942) American painter, respected for her naturalistic landscapes, cityscapes, and still lifes created in an artistic era characterized mainly by abstraction. Freilicher, born in Brooklyn, New York, earned a bachelor's degree in art from Brooklyn College in 1947. She also studied with German American painter Hans Hofmann in 1947 at his schools in New York City and Provincetown, Massachusetts, where she became associated with abstract expressionism, a movement of painters and poets of the 1940s and 1950s.Freilicher's work was influenced by her friendship with Fairfield Porter, an American painter and art critic who encouraged her to reconcile her realist's interest in objective observation of nature with her abstract expressionist's interest in a unique inner vision. The Mallow Gatherers (1958, collection of the artist) is an example of Freilicher's ability to celebrate nature while also celebrating the act of painting nature. In the 1960s she began alternating summers in her studio in Water Mill, Long Island, New York, with winters in her New York City residence. The views from each of these homes inspired the landscapes and cityscapes for which she is best known.Freilicher exhibited in New York City at the Tibor de Nagy Gallery from 1952 to 1972, and then at the Fischbach Gallery. In Loaves and Fishes (1972, private collection), typical of her work of the 1970s, a table appears implausibly tilted toward the viewer, while a colorful still life fills the foreground. In the late 1970s and 1980s, Freilicher's paintings frequently juxtaposed indoor and outdoor scenes, man-made objects and nature, as in Peonies (1988, Fischbach Gallery), in which flowers on a window sill appear to merge with the distant landscape behind them. In 1995 Freilicher's work was included in the prestigious Whitney Biennial at the Whitney Museum of American Art in New York City. A Very Fine, Pristine, apparently unread copy. Box presents nearly indistinguishable sunning to front and rear panels as well as a small, half-inch smudge to upper rear panel. LEC Letter laid-in.

The Heldfond Book Gallery is an elected member of the Antiquarian Booksellers Association of America and the International League of Antiquarian Booksellers and conforms to all ethical codes and standards of those organizations.Books found to be materially mis-described may be returned within seven days of receipt and all monies will be promptly refunded, if returned to us in the same condition as sent.

Seller rating:
This seller has earned a 5 of 5 Stars rating from Biblio customers.
Biblio.com member since: 2005
San Anselmo, California
Ask Seller a Question

Located just accross the Golden Gate Bridge in Marin County, California - the Heldfond Book Gallery, Ltd. is one of the oldest and most esteemed Rare Bookstores on the West Coast. Specializations include: Illustrated Books in all disciplines, Fine Bindings and Sets, Important Literary First Editions,Fine Arts, Collectable Children's Illustrated Books, Illuminated Manuscripts and Incunabula,Rare Aviation and Maritime as well as a consistently superb inventory of General Antiquarian Materials.

spine
The outer portion of a book which covers the actual binding. The spine usually faces outward when a book is placed on a shelf....[more]
colophon
The colophon contains information about a book's publisher, the typesetting, printer, and possibly even includes a printer's...[more]
morocco
Morocco is a style of leather book binding that is usually made with goatskin, as it is durable and easy to dye. (see also...[more]
laid-in
"Laid In" indicates that there is something which is included with, but not attached to the book, such as a sheet of paper. The...[more]
fine
A book in fine condition exhibits no flaws. A fine condition book closely approaches As New condition, but may lack the...[more]
folio
A folio usually indicates a large book size of 15" in height or larger when used in the context of a book description....[more]