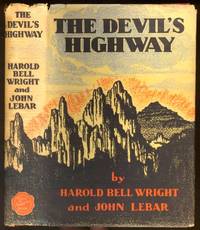 New York: D. Appleton, 1932. First Edition. Hardcover. Near Fine+/Fine-. First Printing, with the number (1) in parenthesis on the final page. 8vo; [6], 336pp. Publisher's crimson cloth, the spine and upper cover lettered in gilt; in the original illustrated dust jacket priced at $2.00. A Near Fine or better copy, very lightly rubbed and dust-soiled; in a just about Fine, lightly edge-worn jacket. Little read today, the novels of Harold Bell Wright outsold those of every other American writer during the first quarter of the twentieth century. Newspapers of the day claimed Wright was the first author to write a novel that reached a million sales, and the statement cannot be far wrong. (The Devil's Highway, on the other hand, sold very few copies, making it today one of the most difficult of Wright's titles to obtain, in any condition.) John Lebar was the pen name of Wright's oldest son, Gilbert Munger Wright. In the Devil's Highway, they launched a scathing attack on "scientism," the belief that, in due coarse, all human misery will be solved by science. As such, the book can be seen as an attack on Nazism, Fascism and Communism, all then taking root, and more broadly on any effort to displace old-fashioned values with modern, scientific ideas. Interestingly, Ronald Reagan was one of Wright's most devoted followers. Note: With few exceptions (always identified), we only stock books in exceptional condition, with dust jackets carefully preserved in archival, removable polypropylene sleeves. All orders are packaged with care and posted promptly. Satisfaction guaranteed.

Cloth
"Cloth-bound" generally refers to a hardcover book with cloth covering the outside of the book covers. The cloth is stretched...[more]
spine
The outer portion of a book which covers the actual binding. The spine usually faces outward when a book is placed on a shelf....[more]
jacket
Sometimes used as another term for dust jacket, a protective and often decorative wrapper, usually made of paper which wraps...[more]
First Edition
In book collecting, the first edition is the earliest published form of a book. A book may have more than one first edition in...[more]
fine
A book in fine condition exhibits no flaws. A fine condition book closely approaches As New condition, but may lack the...[more]