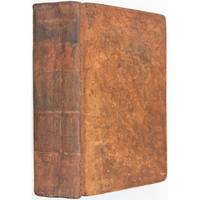 Shrirampure chapa haila [Serampore],: Serampore Mission Press, 1803 [but 1806]. Second edition, 21.5 x 14 cm., pp.[868]. A remarkably clean and fresh copy in contemporary calf binding. Spine professionally restored. The second, substantially revised, edition of the complete New Testament translated into Bengali by William Carey. William Carey (1761-1834), the "father of modern missions," went to Calcutta in 1793 as a Baptist missionary shortly after publishing his groundbreaking tract, An Enquiry into the Obligations of Christians to use Means for the Conversion of the Heathens, and founding, with John Rylands among others, the Particular Baptist Society for the Propagation of the Gospel amongst the Heathen. He began learning the Bengali language aboard ship en route, employed Rama Rama Vasu as tutor on arrival, and moved to Midnapore where he earned his living managing the indigo factory. As indigo was seasonal, he had time to set up his new mission and continue working on his translation of the New Testament into Bengali. He saw its printing as the first major objective of the Serampore Mission. Carey completed his first draft in 1797, and procured a wooden hand-press at Calcutta the following year, but it was not until he and his fellow Baptists moved to the Danish colony of Serampore that printing could begin beyond East India Company control. When his translation of New Testament to Bengali was first printed in 1801 in an edition of 2000 copies it was the first Bible to be printed in any language of northern India. He continued his study of Bengali and began printing this second revised edition in 1803, but was unable to complete it until 1806, when it was issued in an edition limited to only 1500 copies due to shortage of funds. As with several of the earliest Biblical translations issued by the Serampore Mission Press, the date appearing on the title-page represents the commencement rather than the completion of its printing. This second edition is a substantial revision of the first, reflecting Carey's greater acquaintance with the Bengali language. Darlow & Moule No.2049; Historical catalogue of printed Christian scriptures in the languages of the Indian sub-continent (London: The British and Foreign Bible Society, 1977), No. 116; Memoir relative to the translation of the sacred scriptures: the Baptist Missionary Society in England (Dunstable, 1808); J. S. M. Hooper, Bible translation in India, Pakistan and Ceylon. Second edition revised by W. J. Culshaw (London: Oxford University Press, 1963). COPAC records three copies only

New
A new book is a book previously not circulated to a buyer. Although a new book is typically free of any faults or defects,...[more]
calf
Calf or calf hide is a common form of leather binding.  Calf binding is naturally a light brown but there are ways to treat...[more]
spine
The outer portion of a book which covers the actual binding. The spine usually faces outward when a book is placed on a shelf....[more]