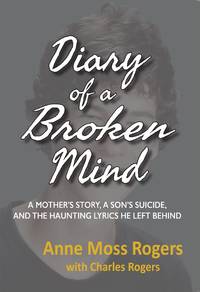 DIARY OF A BROKEN MIND

DIARY OF A BROKEN MIND: A Mother's Story, A Son's Suicide, and The Haunting Lyrics He Left Behind

50 Copies Available from This Seller

(You can add more at checkout.)
Item Price
$16.95
Or just $15.26 with a
Bibliophiles Club Membership
FREE Shipping to USA Standard delivery: 2 to 8 days
More Shipping Options

THE FUNNIEST, MOST POPULAR KID IN SCHOOL, Charles Aubrey Rogers suffered from depression and later addiction, then ultimately died by suicide.

Diary of a Broken Mind focuses on the relatable story of what led to his suicide at age twenty and answers the why behind his addiction and this cause of death, revealed through a mother's story and years of Charles' published and unpublished song lyrics. The closing chapters focus on hope and healing-and how the author found her purpose and forgave herself.

Diary of a Broken Mind is a poignant and powerful story written with telling detail and searing honesty-and hope. It is an inside look at the issues of depression, addiction, and suicide affecting so many families. It is a book that won't easily be forgotten.

Anne Moss Rogers is the award-winning author of Diary of a Broken Mind; co-author of Emotionally Naked: A Teacher's Guide to Preventing Suicide and Recognizing Students at Risk, and owner of a blog that reaches millions, Emotionally Naked. She is also a professional speaker who captures hearts and fills them with hope. She has been featured in the New York Times and was the first non-clinician ever invited to speak on suicide at the National Institute of Mental Health. Since 2010, she has been a board member of Beacon Tree Foundation and an advocate for youth mental health. She is also a 2019 YWCA Pat Asch Fellowship for Social Justice winner. A University of North Carolina alumna, Anne Moss lives in Richmond, Virginia, with her husband. Her surviving son, Richard, is a filmmaker in Los Angeles.

Charles Rogers was born April 26, 1995, and died by suicide, as a result of depression and addiction on June 5, 2015. He loved dogs, funky socks, drama, writing, performing rap, and making people laugh. But most of all, he loved and cared about people.

10-day return guarantee, with full refund including original shipping costs for up to 30 days after delivery only if an item arrives misdescribed or damaged.

Seller rating:
This seller has earned a 5 of 5 Stars rating from Biblio customers.
Biblio.com member since 2021
North Chesterfield, Virginia
Ask Seller a Question

BEACH GLASS BOOKS was begun in 2010 by award-winning Author Lindsay McAllister Zarse to publish her first children's book, The Magic of Topsail Island. The Beach Glass Books logo, a stylized image of a wave breaking over an open book, was created by artist/illustrator Brian Martin, who also illustrated The Magic of Topsail Island. The two later collaborated on two other children's books, MISSING! A Topsail Turtle Tale and Pirates on Friday.

Several years later author Ray McAllister (RayMcAllister.com) was able to secure the rights to his award-winning non-fiction books about the North Carolina coast, which he brought to Beach Glass. (The opportunity arose when legendary regional publisher John F. Blair, Publisher, had to be merged into another firm with the retirement of its principals.) The company became legally affiliated with Ray McAllister Books LLC and began distributing his beach books and two others. Therein followed the publication of an updated and enlarged second editions of Wrightsville Beach: The Luminous Island and Hatteras Island: Keeper of the Outer Bank, as well as the publication of a new book: Ocracoke: The Pearl of the Outer Banks. An expanded second edition of Topsail Island: Mayberry by the Sea followed.

For guidelines on having manuscripts considered for publication by Beach Glass Books, please see SUBMISSIONS at BeachGlassBooks.com

New
A new book is a book previously not circulated to a buyer. Although a new book is typically free of any faults or defects, "new"... [More]
A.N.
The book is pristine and free of any defects, in the same condition as ... [More]