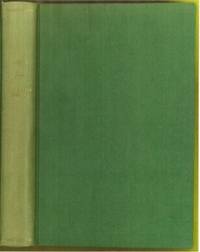 Cecilio A Robelo (1839 - 1916) was an attorney by trade, but passionately interested in the archaeology of Mexico and the foremost nahuatlato of his day. He was the first director of the Museum of Archaeology. This dictionary, first published in parts in the Anales of the Museo (1905 & 08), was a ground-breaking undertaking, matching the gods and goddesses of the Aztecs to their representations in the codices and archaeological remains. The volume is well illustrated, for that reason, although he did not manage to go beyond the letter "q" in this work: later editions by other hands have completed the work..

Seller rating:
This seller has earned a 4 of 5 Stars rating from Biblio customers.
Biblio.com member since 2005
Fort Worth, Texas
Ask Seller a Question

buckram
A plain weave fabric normally made from cotton or linen which is stiffened with starch or other chemicals to cover the book... [More]
spine
The outer portion of a book which covers the actual binding. The spine usually faces outward when a book is placed on a shelf.... [More]
quarto
The term quarto is used to describe a page or book size. A printed sheet is made with four pages of text on each side, and the... [More]
sunned
Damage done to a book cover or dust jacket caused by exposure to direct sunlight.  Very strong fluorescent light can cause... [More]
gilt
The decorative application of gold or gold coloring to a portion of a book on the spine, edges of the text block, or an inlay in... [More]
offset
A technique of printing where the inked image or text is ... [More]