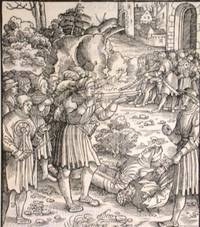 [Colophon on A8v:] Nuremberg: Johann Schönsperger, [1517]., 1517. folio. 353 x 248 mm. [ff. 290, incl. blank P5]. xylographic title. 118 large woodcuts in the text. A very nice tall copy bound in 19th century antique-style blind-stamped morocco by Clarke & Bedford, all edges gilt (some wear to edges & joints but binding solid, p6, t1 & the 8 leaves of the last gathering remargined & possibly supplied from a smaller copy, occasional light spotting, scattered tears & paper defects skilfully repaired - these are mainly marginal but in a few instances the text is slightly affected, on t4 with some letters supplied in pen facsimile, & on m8 & x5 with parts of some letters supplied in pen facsimile). mezzotint portrait (foxed) of Pfintzing inserted. the Huth-Boies Penrose copy, with leather ex-libris & bookplates. First Edition of one of the most celebrated German woodcut books of the sixteenth century. This allegorical poem of knight-errantry celebrates the heroic exploits of the Emperor Maximilian I [1459-1519] on his journey to marry Mary, duchess of Burgundy. A key to the names of the characters and an index are given on the last eight leaves; these are often wanting. After the Emperor had written several initial drafts with the assistance of Marx Treitzsauerwein, the completion and final editing of the text were entrusted to his private secretary Melchior Pfintzing, and the typographical execution to Augsburg printer Johann Schönsperger, who apparently was brought to Nuremberg for this specific purpose as it is the only one of his books with a Nuremberg imprint. Five years were spent preparing the work for printing, which was done at the Emperor's expense. Special types were designed for the book by Vincenz Röckner, court calligrapher, and cut by Hieronymus Andrae. They depart from the usual severe gothic type-faces, and are ornamented with large flourishes in imitation of the best current calligraphic styles. The one hundred and eighteen large woodcuts, among the finest in early German book illustration, were designed by some of the most notable contemporary artists: Leonhard Beck (77), Hans Schäufelein (20), Hans Burgkmair (13), Erhard Schön (3), Wolfgang Traut (2), the Master NH (1), Hans Weiditz (1: doubtful), and Jörg Breu I (1). The same cuts were used in later editions but the finest and darkest impressions are found in the first. Among them are depictions of battles and tournaments, and scenes of hunting (bears, boers, chamois, &c.). Fairfax-Murray notes that this edition is to be considered as a privately printed book, not intended for sale, with no copies passing out of the possession of Maximilian before his death in 1519. ".the whole stock of copies lay in six chests at Augsburg until March 1526, when the Archduke Ferdinand decided to distribute, through Marx Treitzsauerwein, the contents of five of the chests to different subjects as memorials of the late Emperor. The other chestful the archduke kept for himself." Adams P962. BM STC German p. 690. Brunet V 767. Fairfax Murray, German, 329. Graesse VII 106. Proctor 11180. Rosenwald 634. Updike, Printing Types, I 140.. 1st Edition. Hardcover.

Seller rating:
This seller has earned a 3 of 5 Stars rating from Biblio customers.
Biblio.com member since: 2006
Toronto, Ontario
Ask Seller a Question

leaves
Very generally, "leaves" refers to the pages of a book, as in the common phrase, "loose-leaf pages." A leaf is a single sheet...[more]
edges
The collective of the top, fore and bottom edges of the text block of the book, being that part of the edges of the pages of a...[more]
gilt
The decorative application of gold or gold coloring to a portion of a book on the spine, edges of the text block, or an inlay in...[more]
morocco
Morocco is a style of leather book binding that is usually made with goatskin, as it is durable and easy to dye. (see also...[more]
folio
A folio usually indicates a large book size of 15" in height or larger when used in the context of a book description....[more]
facsimile
An exact copy of an original work. In books, it refers to a copy or reproduction, as accurate as possible, of an original...[more]
First Edition
In book collecting, the first edition is the earliest published form of a book. A book may have more than one first edition in...[more]