Rare books Antique & Collectible Books More Rare Books from Roger Middleton DISCOVERIES OF THE FRENCH IN 1768 AND 1769, TO THE SOUTH-EAST OF NEW GUINEA, with the subsequent visits to the… 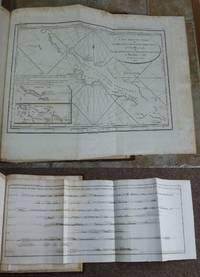 DISCOVERIES OF THE FRENCH IN 1768 AND 1769, TO THE SOUTH-EAST OF NEW GUINEA, with the subsequent visits to the same lands by English Navigators, who gave them new names.

DISCOVERIES OF THE FRENCH IN 1768 AND 1769, TO THE SOUTH-EAST OF NEW GUINEA, with the subsequent visits to the same lands by English Navigators, who gave them new names.

London, printed for John Stockdale, 1791.. To which is prefixed, an historical abridgment of the voyages and discoveries of the Spaniards in the same seas. By M.***, formerly a Captain in the French navy. Translated from the French. FIRST ENGLISH EDITION 1791. 4to, approximately 290 x 230 mm, 11½ x 9 inches, 11 folding maps and charts including frontispiece, 1 folding plate of arms, utensils and instruments, pages: xxiv, 1-323, [1] Errata and Directions to the Binder, lacking half title, bound in half brown morocco over marbled boards by Morrell (binders name at top of first blank page), gilt dividing lines, raised bands to spine, gilt ruled compartments, gilt lettering, all edges stained yellow by binder, marbled endpapers. Small light scrape to 1 corner piece, tiny bump to 1 corner, large bookplate of HENRY LUKE WHITE OF NEW SOUTH WALES, pastoralist, philanthropist, book collector naturalist etc (1869 - 1927) on front pastedown, See Australian Dictionary of Biography, articles about him can also be found on Google, faint ink name and date 1840 on title page, foxing to frontispiece and title page, page 49 and final text page lightly browned, 2 pages have strip of browning in top margin very small light ink stain to 1 margin, first endpapers browned, otherwise text clean, faint browning and foxing to folding charts, 2 slightly misfolded, margins of some lightly foxed, shallow rippling to outer margins. A very good copy. First published in Paris in 1790, this is an account of the French discovery of the Solomon Islands. It includes an appendix containing an extract from a memoir concerning the existence and situation of the Solomon Islands; presented to the Royal Academy of Sciences, Jan. 9, 1781, by M. Buache. "Fleurieu was a French politician and scientist... and a pioneer in the promotion and early history of French South Seas exploration. This work principally concerned with the achievements of Bougainville and Surville, sought to justify the originality of French discoveries in those seas, which were disputed by English navigators." National Maritime Museum Catalogue, Volume I No. 561; Cox Travel II, page 304; Ferguson, Bibliography of Australia Volume I, page 45, No. 105; Hill, Pacific Voyages, Volume I page 105, Sabin, Dictionary of Books Relating to America, 24749; Bibliography of Captain James Cook, editor M.K. Beddie, page 240, Numbers 1300-1303; Hordern House, The Parsons Collection, Part 1, No. 54; Rolf Du Rietz, Bibliotheca Polynesiana, Polynesiana collection formed by Kroepelien, page 138, No. 437. MORE IMAGES ATTACHED TO THIS LISTING, ALL ZOOMABLE. FURTHER IMAGES ON REQUEST. POSTAGE AT COST.

morocco
Morocco is a style of leather book binding that is usually made with goatskin, as it is durable and easy to dye. (see also...[more]
title page
A page at the front of a book which may contain the title of the book, any subtitles, the authors, contributors, editors, the...[more]
plate
Full page illustration or photograph. Plates are printed separately from the text of the book, and bound in at production. I.e.,...[more]
gilt
The decorative application of gold or gold coloring to a portion of a book on the spine, edges of the text block, or an inlay in...[more]
foxed
Foxing is the age related browning, or brown-yellowish spots, that can occur to book paper over time. When this aging process...[more]
Marbled boards
...[more]
half title
The blank front page which appears just prior to the title page, and typically contains only the title of the book, although, at...[more]
spine
The outer portion of a book which covers the actual binding. The spine usually faces outward when a book is placed on a shelf....[more]
raised band(s)
Raised bands refer to the ridges that protrude slightly from the spine on leather bound books.  The bands are created...[more]
bookplate
Highly sought after by some collectors, a book plate is an inscribed or decorative device that identifies the owner, or former...[more]
New
A new book is a book previously not circulated to a buyer. Although a new book is typically free of any faults or defects,...[more]
edges
The collective of the top, fore and bottom edges of the text block of the book, being that part of the edges of the pages of a...[more]
errata
Errata: aka Errata Slip A piece of paper either laid in to the book correcting errors found in the printed text after being...[more]