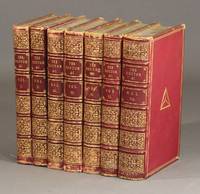 London: Longman, Rees, Orme, Brown, Green and Longman, 1835. 12mo, 7 volumes, volumes 1-3 second edition, the rest first; title pages printed in red and black with a geometric motif central; errata slip tipped-in in volume 6, color frontispiece in vol. 7; contemporary red morocco gilt for Toovey, bookseller, 177 Piccadilly, with gilt-decorated spines in 6 compartments, gilt-lettered direct in 2, double gilt borders enclosing a geometric motif in gilt on upper covers, repeating that on the title pages; joints and corners scuffed and rubbed, neat manuscript index in pencil on the back flyleaf of most volumes, volume 2 with front cover neatly reattached; all else generally very good and sound. The Doctor was the anonymous project of Robert Southey, intended to be a meandering, experimental, and possibly intentionally incomplete work, in which a story about the "Doctor Daniel Dove of Doncaster and his horse Nobs" is promised to the reader but after seven volumes never begins. Southey died while still working on it, and the final two volumes were published posthumously, at which point his authorship was finally acknowledged. The Doctor is a quintessential shaggy dog story, with every short chapter barely associated with the next, if at all, but the work as a whole is now mostly known as the place in which the story of "The Three Bears" was first printed. (Goldilocks was not added to the story until sometime later.) The Osborne Collection notes a manuscript of the story from 1831 with illustrations by Elanore Mure as the earliest extant version. Of The Doctor it notes: "Both Joseph Jacobs and F. J. Harvey Darton have attributed the authorship of the story to Robert Southey, who included it in volume 4 of The Doctor, published in 1837, six years after this manuscript was made." Southey's relationship to the manuscript is unknown, but he does appear to be the first to have put the story to print. NCBEL III, 257.

errata
Errata: aka Errata Slip A piece of paper either laid in to the book correcting errors found in the printed text after being... [More]
gilt
The decorative application of gold or gold coloring to a portion of a book on the spine, edges of the text block, or an inlay in... [More]
morocco
Morocco is a style of leather book binding that is usually made with goatskin, as it is durable and easy to dye. (see also... [More]
12mo
A duodecimo is a book approximately 7 by 4.5 inches in size, or similar in size to a contemporary mass market paperback.... [More]