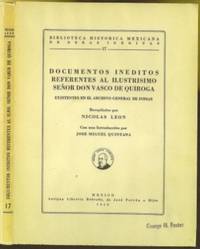 Vasco de Quiroga was born into a noble family. He studied law and later theology. He became a lawyer in Salamanca in 1515. He took holy orders late in life, but advanced rapidly in the church. He was a judge of the Chancellor's Court of Valladolid at the time of his appointment in 1530 as one of the oidores of the second Audiencia in New Spain. After the disaster of the first Audiencia, Emperor Charles V was determined to find officials of proven humanity and integrity for the second one. This he was able to do by soliciting the recommendations of the archbishop of Santiago, Juan Tavera. The president of this second Audiencia was Bishop Sebasti Ramez de Fuenleal, and the other members were Quiroga, Juan de Salmer, Alonso de Maldonado and Francisco Ceinos. They began governing in Mexico City in 1531. Quiroga founded the hospital-pueblo of Santa Fe (Mexico City), with his own money. This was his first attempt at building a Utopia on the model of Sir Thomas More. He converted many Indigenous to Christianity. He sat on the tribunal that ordered the bloody conquistador and president of the first Audiencia, Nu Beltr de Guzm, be returned to Spain in chains, where he spent the rest of his life in prison. Quiroga and the other oidores of the second Audiencia also conducted the trial of Juan Ortiz de Matienzo and Diego Delgadillo of the first Audiencia. On the emperor's nomination he became the first bishop of Michoac in 1537. He remained in Michoac as pastor and protector of the Indians for most of the remainder of his life. As bishop, he transferred the seat of the bishopric from Tzintzuntz to Patzcuaro. In Patzcuaro he founded the cathedral and the Seminary of San Nicolas. He worked to gather the Indians in large towns near Lake Pzcuaro in the center of Tarascan territory, recently ravaged by Beltr de Guzm. Using Thomas More's Utopia as a model, here the Indians were to be taught religion, crafts and the fundamentals of self-government. Each town was to become the center of an industry. Each person worked six hours a day and contributed on an equal basis to the common welfare. He gradually realized the necessity of restricting the scope of his plans, which he had hoped to apply throughout the colony, to the smaller area over which he had jurisdiction, partially because his personal funds were not unlimited. When the newly conquered Chichimec Indians of Michoac rebelled in 1533, Quiroga was sent to that province as visitador (inspector). With his prudent and just measures, he soon pacified the rebels. Here he founded another hospital of Santa Fe, also on More's principles. Greatly influenced by More's socialist Utopia, Quiroga believed that applying its principles to the Indian population would be the best way to counteract the earlier depredations of Beltr de Guzm. Bishop Quiroga's efforts were very successful, and he was said to be greatly beloved by the members of his flock. He was known to them as Tata Vasco (Father Vasco). Charles V had prohibited the enslavement of conquered subjects, but in 1534 he revoked that prohibition, at least insofar as to allow slavery of natives captured in a "just war". When Quiroga became aware of this, he wrote to Charles his celebrated Informaci en derecho (1535), in which he strongly condemned the encomenderos, saying that they did not accept the natives as men, but only as beasts. Quiroga passionately defended the Indians, arguing that they did not deserve the loss of liberty. In 1545 Quiroga left for Spain to attend the Council of Trent, but his ship was damaged and he was forced to return to New Spain. He left again in 1547 and did attend some sessions of the Council. He took several Indians with him and presented them at Court. While in Spain he was frequently called upon by the emperor and the Council of the Indies to give advice on colonial questions. He returned to New Spain in 1554. On his stopover in Santo Domingo, he obtained banana seedlings, which he introduced into Michoac. In 1555 he participated in the first provincial council of the Church. He died in 1565 in his 90's on a pastoral visit in Uruapan.

spine
The outer portion of a book which covers the actual binding. The spine usually faces outward when a book is placed on a shelf....[more]
remainder
Book(s) which are sold at a very deep discount to alleviate publisher overstock. Often, though not always, they have a remainder...[more]
First Edition
In book collecting, the first edition is the earliest published form of a book. A book may have more than one first edition in...[more]
wrappers
The paper covering on the outside of a paperback.  Also see the entry for pictorial wraps, color illustrated coverings for...[more]
octavo
Another of the terms referring to page or book size, octavo refers to a standard printer's sheet folded four times, producing...[more]
New
A new book is a book previously not circulated to a buyer. Although a new book is typically free of any faults or defects,...[more]
sunned
Damage done to a book cover or dust jacket caused by exposure to direct sunlight.  Very strong fluorescent light can cause...[more]