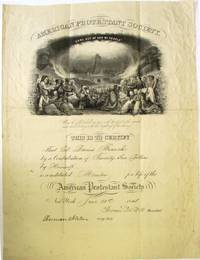 DOCUMENT SIGNED, BY THOMAS DE WITT, PRESIDENT OF THE AMERICAN PROTESTANT SOCIETY, AND HERMAN NORTON, ITS CORRESPONDING SECRETARY, CERTIFYING THAT COLONEL DARIUS BRANCH IS A LIFE MEMBER OF THE SOCIETY. DATED AT NEW YORK, JUNE 21, 1848

DOCUMENT SIGNED, BY THOMAS DE WITT, PRESIDENT OF THE AMERICAN PROTESTANT SOCIETY, AND HERMAN NORTON, ITS CORRESPONDING SECRETARY, CERTIFYING THAT COLONEL DARIUS BRANCH IS A LIFE MEMBER OF THE SOCIETY. DATED AT NEW YORK, JUNE 21, 1848

Engraved broadside, 11-3/4" x 15-1/2". Old folds and light soil, Very Good. Elaborate, fine engraved image, drawn by G. Muller and engraved by Bonar & Cumming, depicting masses of heathen-- including Indians, Africans [one holding a spear], Middle Eastern types, and others-- lining up to be converted to Christ. The engraving is captioned, "Come Out of Her My People." Very Good. An organization devoted to attacking Roman Catholicism and converting unbelievers-- particularly foreign-born Irish immigrants-- to Protestant Christianity, the American Protestant Society was founded in 1844 as the Know-Nothing Movement was growing exponentially, especially in eastern cities to which those immigrants had flocked. De Witt, its President, like other Know-Nothings, believed that the hierarchical structure of Roman Catholicism was incompatible with republican institutions. Col. Darius Branch [1767-1851], a native of Lenox, Massachusetts, moved to Bennington, Vermont, as a young man. He settled in Castleton, Vermont, and became a colonel in the local artillery unit. In July 1848 he donated $23 to the American Protestant Society which, combined with his earlier $2 donation, earned him a lifetime membership. [VERMONT HISTORICAL GAZETTEER, VOLUME 3, 1877, Page 509; AMERICAN PROTESTANT MAGAZINE, VOLUME 4, AUGUST, 1848, Page 95.] Rev. Thomas De Witt [1791-1874] graduated from Union College and the Theological Seminary of the Dutch Church at New Brunswick, having been a member of the first class of that institution. He was minister of the Collegiate Church of New York from 1827 until his death. In addition to his pastoral duties and work with numerous Christian societies, he performed editorial work with the "Christian Intelligencer," served as one of the New York Historical Society's vice-presidents for 30 years and as its president for two. [YEAR BOOK OF THE COLLEGIATE REFORMED PROTESTANT DUTCH CHURCH, ISSUE 18, 1897, Pages 457-65.] Rev. Herman Norton [1799-1850], from New Hartford, New York, graduated from Hamilton College in 1823. Ordained in 1826, he was elected Corresponding Secretary of the American Protestant Society. [Tappan: THE LIFE OF THE REV. HERMAN NORTON... 1853.].

New
A new book is a book previously not circulated to a buyer. Although a new book is typically free of any faults or defects,...[more]
G
Good describes the average used and worn book that has all pages or leaves present. Any defects must be noted. (as defined...[more]
fine
A book in fine condition exhibits no flaws. A fine condition book closely approaches As New condition, but may lack the...[more]