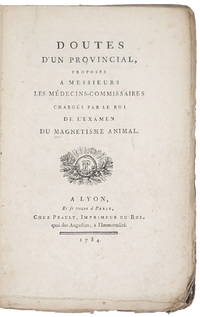 First and only edition of a clever defense of animal magnetism (mesmerism).

Franz Mesmer formulated a theory of a universal magnetic fluidum ('animal magnetism') which permeated all things, including human beings. In Mesmer's view, disease is an obstruction of this fluidum and his task as a doctor was to remove this obstruction. At first he used magnets, but over time he relied on touch and even speech to transmit the fluid into his patients.

Although Mesmer was convinced that his method was purely scientific, many of his contemporaries regarded him as a charlatan and Mesmer struggled all his life for scientific recognition. In 1784 an appointed commission of the French Academy of Sciences investigated Mesmer's discovery. The commission, boasting such eminent members as Benjamin Franklin and Lavoisier, finally denied the existence of animal magnetism and, subsequently, its supposed curing effect.

The present pamphlet was written in response to the Academy's conclusion, staunchly defending animal magnetism. "This pamphlet is the best of the many attacks published by pro-mesmerists against the report of the first Royal Commission" (Norman).

wrappers
The paper covering on the outside of a paperback.  Also see the entry for pictorial wraps, color illustrated coverings for...[more]
edges
The collective of the top, fore and bottom edges of the text block of the book, being that part of the edges of the pages of a...[more]
spine
The outer portion of a book which covers the actual binding. The spine usually faces outward when a book is placed on a shelf....[more]