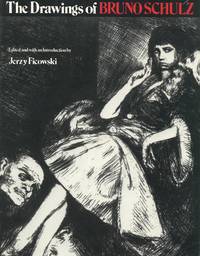 The Drawings of Bruno Schulz.

The Drawings of Bruno Schulz.

Evanston, IL Northwestern University Press, 1990. Paperback First Ed thus; First Printing indicated. First Ed thus; First Printing indicated. Near Fine in Wraps: shows only minor indications of use: crease near the lower rear corner, and a smaller, fainter crease at the lower front corner; a faint waviness to the text block at the top edge; else only the the mildest rubbing. Binding square and secure; text clean. Close to 'As New'. NOT a Remainder, Book-Club, or Ex-Library. 4to. 271pp. Profusely Illustrated in Black & White. Edited and with an Introduction by Jerzy Ficowski. With an Essay by Ewa Kuryluk. Photography by Adam Kaczkowski. Paperback: Pictorial Wraps. In 1941, fearing for his life, Bruno Schulz gave away many of his drawings to trusted friends who took them underground. After his murder, the Germans systematically eradicated most other traces of Schulz's existence. This small but important collection of Schulz's surviving sketches, drawings and engravings represents a major contribution to the archives of European expressionism. This remarkable book, produced by poet and Bruno Schulz scholar Jerzy Ficowski, assembles more than 200 artistic works of the famed Polish Jewish author, best known for The Street of Crocodiles, produced in the 1990s as a play of the same name by Simon McBurney's London Theatre de Complicite. Thanks to that brilliant staging, easily one of the 20th century's most remarkable dramatic productions, audiences of tens of thousands learned of this obscure artist and writer. Born on July 12, 1892, the third and youngest child of a merchant, Schulz lived and worked in Drohobycz, and reflected in all his works his close connection to his family and place. In 1939, the Soviets occupied eastern Poland, and Schulz survived that period without experiencing the deportation suffered by hundreds of thousands of others. Still, he was unable to work. But in June 1941, when the Nazis entered the area, he was like all the Jews of Poland further enslaved. The infamous Viennese Nazi and Jew murderer Felix Landau also had a taste for art, and boasted of keeping a Jewish artist slave alive on one daily bowl of soup and slice of bread. Schulz survived a year under Landau's "protection," but on Black Thursday, Nov. 19, 1942, he was shot in the head by Gestapo officer Karl Guenther and buried at night by a devoted friend in a Jewish cemetery that has since disappeared, along with his grave. Assembled here, with Ficowski's 28-page introduction and his 12-page essay entitled "Catepillar Cat, or Bruno Schulz's Drive into the Future of the Past," are more than 200 Schulz drawings and engravings, most of which reside in Warsaw's Museum of Literature. These include Schulz's The Booke of Idolatry, an early collection of 25 works, including drawings, circa 1919 and later, on which he worked for several years. It illustrates imaginary scenes of mythical pastorals, nymphs and weird men, fawning on women. There are scenes labeled "Masochistic," which are really more fetishist than the sort of full-blown evil one might expect, a series of nudes, and a 12-print section entitled "The Table," reminiscent of scenes from The Street of Crocodiles. In "Jews," readers are treated to 16 prints and sketches of Jewish worshipers, students and scholars. The collection also includes 16 self-portraits and 8 portraits, all of them remarkable in their intensity and precision. There are also several book covers. But my favorite section is the 44-page group of "Illustrations" from Schulz's writings, including The Street of Crocodiles and Sanatorium Under the Sign of the Hourglass. There is one other collection, Letters and Drawings of Bruno Schulz, that contains some of these works. But those reproductions are few, and their quality far inferior. To my knowledge, this is the best gathering of the artists' pictorial works. How much more of his work was lost altogether? We may never know. Schulz' brilliance was incalculable, the loss of his work and world, the more so.

fine
A book in fine condition exhibits no flaws. A fine condition book closely approaches As New condition, but may lack the...[more]
pictorial wraps
Pictorial wraps are color illustrated covers for paperback books.  Preceding mass-market paperbacks,  this format...[more]
remainder
Book(s) which are sold at a very deep discount to alleviate publisher overstock. Often, though not always, they have a remainder...[more]
rubbing
Abrasion or wear to the surface. Usually used in reference to a book's boards or dust-jacket.
text block
Most simply the inside pages of a book.  More precisely, the block of paper formed by the cut and stacked pages of a...[more]