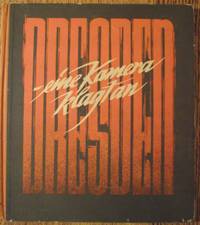 Dresden. Eine Kamera klangt an. 1949. RARE. An extraordinary photographic record of the bomber city of Dresden, and its rebuilding.

In German. A rare book.

Inscribed to the Bulgarian Friends with greetings from the Staatsheater Dresden. 9/5/52

Stamp of the Sokolska Museum at front.

An extraordinary photographic record of the bomber city of Dresden, and its rebuilding.

On the night of the 13 February 1945, the German city of Dresden was attacked by over 800 bombers from the Royal Air Force, followed by another 500 American planes over the next two days, which dropped a total of 3,900 tonnes of bombs and incendiary explosives on the city.

The camera bears witness and accuses.

Good condition. 8 cm tear to back bottom spine. Clean inside.

Seller rating:
This seller has earned a 5 of 5 Stars rating from Biblio customers.
Biblio.com member since: 2016
Liverpool, Merseyside
Ask Seller a Question

MyTomes sells books of a collectable nature, with a specialisation in music.

spine
The outer portion of a book which covers the actual binding. The spine usually faces outward when a book is placed on a shelf....[more]