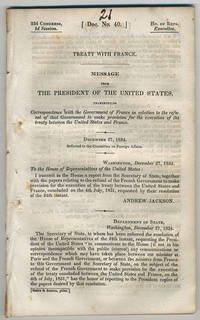 [drop-title] Treaty with France. Message from the President of the United States, transmitting correspondence with the government of France in relation to the refusal of that government to make provision for the execution of the treaty between the United States and France. December 27, 1834. Referred to the Committee on Foreign Affairs.

[drop-title] Treaty with France. Message from the President of the United States, transmitting correspondence with the government of France in relation to the refusal of that government to make provision for the execution of the treaty between the United States and France. December 27, 1834. Referred to the Committee on Foreign Affairs.

Concerns the dispute over the payment by France (under the terms of the teaty of July 4th, 1831) of claims for damage done to American shipping during the Napoleonic Wars. Includes instructions from the State Department, correspondence between the U. S. Minister at Paris and the French Minister of Foreign Affairs, and correspondence between the Secretary of State and the French Minister at Washington. Government document: 23d Congress, 2d Session. Doc. No. 40. Ho. of Reps. Executive. Removed from a nonce volume; three holes in inner margin, not touching text; several leaves separating. Pamphlet creased down length from folding. First page with early inked number at top margin.

(US)
Bookseller Inventory #
11926
Title
[drop-title] Treaty with France. Message from the President of the United States, transmitting correspondence with the government of France in relation to the refusal of that government to make provision for the execution of the treaty between the United States and France. December 27, 1834. Referred to the Committee on Foreign Affairs.
Author
Jackson, Andrew (President, 1829–1837)
Book condition
Used
Publisher
Gales & Seaton, printers
Place of Publication
Washington
Date published
1834
Size
8vo. 84 pp.

Seller rating:
This seller has earned a 3 of 5 Stars rating from Biblio customers.
Biblio.com member since: 2009
Philadelphia, Pennsylvania
Ask Seller a Question

leaves
Very generally, "leaves" refers to the pages of a book, as in the common phrase, "loose-leaf pages." A leaf is a single sheet...[more]