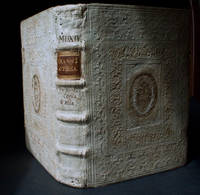 Strasbourg: Matthias Schürer, 1514-1515. First edition of some material. Hard Cover. Very Good/Several related works of Erasmus collected in one binding, including the first edition of Parabolae sive similia (a reported 1513 edition of Parabolae was a longstanding bibliographical error), and the first appearance of Erasmus's farewell letter to Jakob Wimpfeling (Epistle 305). In 1509, the year Mattias Schürer completed his apprenticeship and opened his own print shop, he struck an unauthorized edition of Erasmus's Adagia, purloined from the first edition of 1500. Anger on the author's part would have been justified. Yet, in spite of this commercial indiscretion, Erasmus favored Schurer with a warm, supportive, and lasting friendship. In October, 1514, he gave Schürer the manuscript of "Parabolae, sive similia," which Schürer decided to publish in tandem with a reprint of De Copia (although there are copies extant of Parabolae bound alone). It is fitting that Parabolae should be bound with Adagia in this copy, since it expands on the earlier work's idea of compiling classical maxims. Parabolae (that is, The Parables) is a catalogue of didactic similes gleaned from Plutarch, Seneca, and Pliny (who almost never used similes in his own text). The Adagia is also the subject of Erasmus's letter to Wimpfeling, whom he thanks for recommending it for a school text. Schürer's edition of Adagia of 1515 is the first to contain the printer's own "table of proverbs" to function as a key to the collection. In all, Schürer published 57 editions of 15 titles by Erasmus in the five year period from 1514 to 1519, the year he died.. Quarto (21 cm), three parts in one volume: I: [6], 73, [6] leaves; II: [56] leaves; III: [4], 57, [7] leaves. Numerous five- and six-line "criblé" woodcut initials on black ground decorated with arabesques and figures, many of them carefully rubricated. Second title page with woodcut architectural border, lightly rubricated. Printer's "usui studiosorum" device on last printed page, rubricated. Bound in contemporary or 17th-century blind-stamped alum tawed pigskin over wooden boards, with a Cardinal's arms gilt on both boards. Clasps and catches preserved, straps renewed. Some small worming at spine ends. First title leaf somewhat toned and soiled. Occasional marginalia in contemporary or early hand. Contemporary ownership inscription on title page. References: VD 16 E-2645 and E-3237; Adams E-318 and E-716; Panzer VI, 68, 340-341; "Early Editions" (Toronto) #369, etc.

All items guaranteed authentic and as described. Any purchase is returnable for any reason within 10 days of receipt. New York State residents are obliged to add sales tax. Shipping charges will be assessed and billed at full value. We accept payment by American express, Visa & Mastercard.

Rodger Friedman Rare Book Studio owes its name and its inspiration to the traditional Italian studio bibliografico. These small antiquarian bookshops, typically run by individuals who combine deep scholarship with a love of the printed object, remind us that underlying the words "study" and "studio" is the Latin term for zeal and devotion, studium. Since 1993, my goal has been to match discerning collectors with extraordinary books and manuscripts.

device
Especially for older books, a printer's device refers to an identifying mark, also sometimes called a printer's mark, on the...[more]
reprint
Any printing of a book which follows the original edition. By definition, a reprint is not a first edition.
soiled
Generally refers to minor discoloration or staining.
marginalia
Marginalia, in brief, are notes written in the margins, or beside the text of a book by a previous owner.  This is very...[more]
gilt
The decorative application of gold or gold coloring to a portion of a book on the spine, edges of the text block, or an inlay in...[more]
leaves
Very generally, "leaves" refers to the pages of a book, as in the common phrase, "loose-leaf pages." A leaf is a single sheet...[more]
First Edition
In book collecting, the first edition is the earliest published form of a book. A book may have more than one first edition in...[more]
spine
The outer portion of a book which covers the actual binding. The spine usually faces outward when a book is placed on a shelf....[more]
quarto
The term quarto is used to describe a page or book size. A printed sheet is made with four pages of text on each side, and the...[more]
title page
A page at the front of a book which may contain the title of the book, any subtitles, the authors, contributors, editors, the...[more]