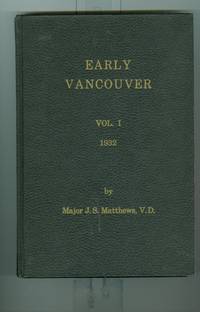 You get both volumes 1 and 2. Both in leather or leather-like binding as new and fresh as the day they were born. Maps diagrams layout of town of Granville, map of Vancouver fire. Privately published in 1932 by Major J.S. Matthews (City Archivist) "Copyright of Provincial Archives of British Columbia). A treasure of a survivor and in perfect gift quality. Some mystery exists over Matthews's work. Each of these volumes has a stereo-signed foreword by Matthews dated March, 1932. (He dies 1970) The foreword of volume 2 reads. "Early Vancouver" Volume Two. Its Reproduction--Five Copies "Early Vancouver, as in 1959.

Research indicates that Volume One was commenced in 1931 and consisted of two books, one in original typescript, which is in the city archives, a carbon copy was presented in 1932 to the Vancouver Public Library. Volume Two was commenced in 1933 and consists of an original typescript, also in the city archives, and two carbon copies....Inexperience was the cause of insufficient copies of "One" and "Two" being made in 1931 and 1933, and resulted in the author being deprived of copies of his own work for his own library at his home. Further copies of "One" were made in 1946, and in 1959 five copies of: Two" were made by Miss Diana Denny, retyping from the original. When the retyped copies of "Two" are bound into books there will be: At City Archives one set of seven books At Provincial Archives, Victoria one set of seven books At Parliamentary Library, Ottawa, one set of seven books At Major Matthews' home, one set of seven books. The date of Matthews' signature at City Archives is May 5th, 1959. It is the result of research. Quite a mystery, and I have no guarantee this information is wholly correct. What I do know is that the book is rarely offered, Volume 1 never and Volume 2 almost never. My two copies are in like-new condition. I have a spare copy of volume 1, also in new condition. Chock full of illustrationsand maps

I note that neither of my ciopoies of volume 1 have any later date BUT that an fep reads " Volume 1 is printed completely uabridged from the original manuscript compiled and written by Major J.S. Matthews. Printed by Brock Webber

Seller rating:
This seller has earned a 5 of 5 Stars rating from Biblio customers.
Biblio.com member since 2014
Victoria, British Columbia
Ask Seller a Question

About Michael's Pride and Joys