Home Books Tell You Why, Inc. East Of The Mountains - 1st Edition/1st Printing 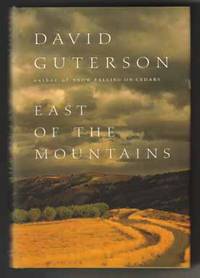 New York: Harcourt Brace & Company. Fine+ in Fine+ dust jacket. 1999. First Edition; First Printing; Signed by Author. Hardcover. 0151002290 . An attractive first edition, first printing in Very Fine condition in alike dust jacket, SIGNED by author David Guterson on the title page; Retired heart surgeon Ben Givens is in the last stages of colon cancer when he decides to escape to his mountains one last time. In this novel by David Guterson, a man seeks dignity in the final episodes of his life but is sidetracked by the power and energy of the livingGuterson won the PEN/Faulkner Award for his book Snow Falling on Cedars .

It is mid-October, 1997, harvest time in the Columbia Basin of central Washington state, a rich apple- and pear-growing region. Ben Givens, recently widowed, is a retired heart surgeon, once admired for his steadiness of hand, his precision, his endurance. He has terminal colon cancer. While Ben does not readily accept defeat, he is determined to avoid suffering rather than engage it. And so, accompanied by his two hunting dogs, he sets out through the mythic American West-sage deserts, yawning canyons, dusty ranches, vast orchards-on his last hunt. The main issues for Ben as a doctor had been tactical and so it would be with his death. But he hadn't considered the persuasiveness of memory-the promise he made to his wife Rachel, the love of his life, during World War II. Or life's mystery. On his journey he meets a young couple who are "forever," a drifter offering left-handed advice that might lessen the pain, a veterinarian with a touch only a heart surgeon would recognize, a rancher bent on destruction, a migrant worker who tests Ben's ability to understand. And just when he thinks there is no turning back, nothing to lose that wasn't lost, his power of intervention is called upon and his very identity tested. Full of humanity, passion, and moral honesty, East of the Mountains is a bold and beautiful novel of personal discovery.

Bookseller
Books Tell You Why, Inc.

Books Tell You Why, Inc.

Shipping after receipt of payment. S.C. residents agree that 7.5% Sales Tax will be added to their invoice. The whole purchase cost (incl. shipping & handling) will be refunded if listing is inaccurate or shipment is damaged. Returns need to be authorized prior to their shipment within 14 days of your receipt.

Books Tell You Why, Inc.

Seller rating:
This seller has earned a 5 of 5 Stars rating from Biblio customers.
Biblio.com member since: 2003
Summerville, South Carolina
Ask Seller a Question

About Books Tell You Why, Inc.

Books provide us with information and knowledge; they can make us happy, sad, smart..... they educate us in so many different ways. We at Books Tell You Why believe in the value of a quality book to provide essential information to kids and grown-ups alike to satisfy and stimulate further the curiosity that drives the development of mankind. What have you learned today? We strive to be leading edge with our products and commit to role model world class customer service. We go the extra mile to connect you with some of the most fascinating books you can find. Books tell you why!

fine
A book in fine condition exhibits no flaws. A fine condition book closely approaches As New condition, but may lack the...[more]
jacket
Sometimes used as another term for dust jacket, a protective and often decorative wrapper, usually made of paper which wraps...[more]
First Edition
In book collecting, the first edition is the earliest published form of a book. A book may have more than one first edition in...[more]