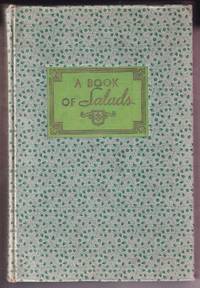 Chicago, IL USA: The Hotel Monthly Press, 1934. Second-hand hardcover. Shircliffe, Arnold. The Edgewater Beach Hotel Salad Book (5th Imp). Hotel Monthly Press: Chicago, IL USA 1934. 4to (260x170mm) HC Dec Bds xxi,[1],306pp, (31 colour illustrations) VG-/- light edgewear & spotting to prelims & illustrations [SIGNED] Shircliffe, Arnold. The Edgewater Beach Hotel Salad Book: contains recipes that have taken years of research to collect; also many new recipes... is a ready reminder for the experienced salad maker and furnishes invaluable working knowledge to those who have natural talent for this work. (5th Impression) Chicago: The Hotel Monthly Press, January 1934.  4to (260x170mm) Hardcover decorated & embossed green boards xxi,[1],306pp. Colour frontispiece, 30 colour illustrations (preface by John Willy) Very Good. [SIGNED]  Boards lightly soiled, some corners lightly bruised, very light foxing to prelims, edges toned, some marginal pencil markings; ownership stamp and notations.  [PRESENTATION COPY - dedicated to Maura Laverty by the author] "Maura Laverty here's a bookand if you'll within it lookyou'll find salads, red, green, yellowthat should please most any fellow Arnold Shircliffe March Twenty fourth Thirty Nine" An owner stamp of "Maura Laverty Castle House, Raheny Dublin" is on the title-page; the name Maura Laverty is written on the edges. Arnold Shircliffe [ d.1952] worked in hospitality his entire life.  His career began in railroad dining cars and by the 1920s he was the catering manager of the Edgewater Beach Hotel, a resort hotel complex on Lake Michigan in Northern Chicago. The author of several books, Shircliffe was also an avid and renowned collector of cookery books and menus. After his death, his significant collection, including over 14,000 menus was auctioned by his family.  Whether all sold is not clear but his son later donated 10,000 menus to the New York Historical Society. Maura Laverty (1907-1966) was a contentious Irish author, journalist and broadcaster perhaps best known for her work on the Irish television drama serial, Tolka Row; Ireland's first TV soap. She published several novels, short stories and critical pieces throughout her career.  She also published 4 well received and popular cookbooks between 1941 and 1960; most notably Maura Laverty's Cookery Book and Full & Plenty; both of which are considered classics of Irish cooking.  Today she is credited with ensuring an Irish national food identity by preserving and celebrating traditional Irish dishes in her cookbooks.

Seller rating:
This seller has earned a 5 of 5 Stars rating from Biblio customers.
Biblio.com member since: 2018
Melbourne, Victoria
Ask Seller a Question

About Books for Cooks

Australia's specialist indie culinary bookstore for armchair cooks, professional chefs & avid foodies right in the heart of Melbourne at the Queen Victoria Market; open every day. We stock over 45,000 new, old, vintage and antiquarian books about food and drink as well as a food & drink related ephemera. Members of ANZAAB, ILAB and the Australian Booksellers Association. Established 1983.

New
A new book is a book previously not circulated to a buyer. Although a new book is typically free of any faults or defects,...[more]
bds
Common term for the covers of a hardbound book.  The term 'boards' refers to the thick cardboard under the paper or cloth...[more]
edges
The collective of the top, fore and bottom edges of the text block of the book, being that part of the edges of the pages of a...[more]
soiled
Generally refers to minor discoloration or staining.