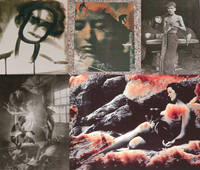 Chicago, IL: Stephen Daiter Gallery / Barry Singer Gallery, 2003. First Edition. First Printing.. Softcover. As New/As New Dust Jacket.. Chicago, IL: Stephen Daiter Gallery / Barry Singer Gallery, 2003. Softcover. As New/As New. First Edition/First Printing. 56 pages. Exhibition Catalog. The first and only edition. Published in a small and limited print run as a softcover original only. There is no ISBN. The Exhibition Catalog is now scarce. A brilliant production by David W. Williams: Regular-sized volume format. Plain white softcovers, as issued. Photographs by Edmund Teske. Printed on pristine-white, thick coated stock paper in the United States to the highest standards. In integral pictorial DJ with titles on the cover and spine and very large flaps, as issued. Published on the occasion of the exhibition of the same name held jointly by the Stephen Daiter Gallery Chicago from March 7 through April 26, 2003 and Barry Singer Gallery Los Angeles from April 5 through June 21, 2003. Presents "Edmund Teske: Chicago And Remembrances". Shows the range of Edmund Teske's work as a peerless artist/photographer/visionary. Teske's architectural photography was magisterial in a straightforward and realistic way. A lifelong disciple of Walt Whitman and later a convert of Vedanta, his art evolved into a much more personal and inward-looking vein, which has been characterized as "Romantic". The Bauhaus influence (Teske taught at the Bauhaus School of Chicago) led him to various experiments using techniques such as solarization, superimposition, multiple exposures, composite printing, and duotoning, all with breathtaking results. Yet ultimately, it is Teske's mystical vision in all its poetic beauty that will move the viewer of these photographs, which are some of the most beautiful ever made by an artist. Teske's work evolved dramatically and demands to be seen in its entirety, now possible through the Permanent Collection of the J. Paul Getty Museum, which owns the single largest public collection of his work. An absolute "must-have" title for Edmund Teske collectors. <B><i> This title is a contemporary art photography classic. This is one of few copies of the Exhibition Catalog still available online and is in especially fine condition: Clean, crisp, and bright, a pristine beauty. A scarce copy thus. </b></i> Lavishly illustrated with color plates. One of the greatest artists of the 20th century. A fine copy. (SEE ALSO OTHER EDMUND TESKE TITLES IN OUR CATALOG).

flap(s)
The portion of a book cover or cover jacket that folds into the book from front to back.  The flap can contain biographical...[more]
First Edition
In book collecting, the first edition is the earliest published form of a book. A book may have more than one first edition in...[more]
New
A new book is a book previously not circulated to a buyer. Although a new book is typically free of any faults or defects,...[more]
crisp
A term often used to indicate a book's new-like condition. Indicates that the hinges are not loosened. A book described as crisp...[more]
spine
The outer portion of a book which covers the actual binding. The spine usually faces outward when a book is placed on a shelf....[more]
fine
A book in fine condition exhibits no flaws. A fine condition book closely approaches As New condition, but may lack the...[more]
jacket
Sometimes used as another term for dust jacket, a protective and often decorative wrapper, usually made of paper which wraps...[more]