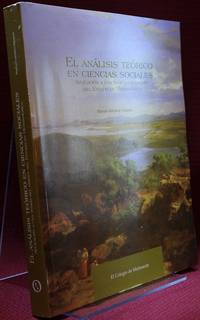 Theoretical analysis in social sciences. Application to a theory of the origin of the State in Mesoamerica, is a book that as the author points out in the introduction, was forged in the Center of Archaeological Studies at the Colegio de Michoacán in La Piedad, during his sabbatical year that Dr. Gándara did there in 2007. During this period he invited William Sanders to give a seminar on the center of Mexico. While Sanders was there, Dr Gandara was able to interview him in depth on the subject matter. This interview provided Gándara with information that included was in the book, above all, Sanders' views on the theory raised in the 1970s in the light of the retrospective since 2007. It is worth noting that the author presents as an almost natural relationship which is actually surprising: precisely the relationship between the Philosophy of science and Archaeology. Although the field of archaeological discipline in the United States has given rise to disputed (and debatable) theoretical positions in the Philosophy of Science, the truth is that this is a rather rare relationship. Today we can question this relationship with young archaeologists graduated from various institutions which would show a genuine surprise and perhaps even a dubious attitude toward this relationship. However, as the author shows throughout his book, this relationship is so deep that it has operational implications in the everyday work of archaeologists anywhere in the world. In this sense, the book constitutes, something which ethnohistorian Teresa Rojas has suggested must be done in all social disciplines: a moment of reflection, a stop in the daily course that leads us to the evaluation of what has been done, what is being done and thus be able to outline the paths towards where the new steps of the disciplines will be directed. Although this serious reflection might sound tedious given the formality and responsibility of this task, once again Manuel Gándara shows his talent as a writer, and a teacher, to carry it out. Indeed, with a personal tone, with a clear and remarkably amiable language, he raises the problems that lead to other problems of a philosophical, political, personal attitude of certain actors, when they are not clear or even when they are not even identified as problems. The book, therefore, is another example of this enviable ability of the author to put on the work table topics, discussions and debates of the theoretical scope both in Archaeology and Philosophy of science, and also between both, which are not simple, but that makes them seem simple.

Light edge wear else a near fine copy.

fine
A book in fine condition exhibits no flaws. A fine condition book closely approaches As New condition, but may lack the...[more]
First Edition
In book collecting, the first edition is the earliest published form of a book. A book may have more than one first edition in...[more]
New
A new book is a book previously not circulated to a buyer. Although a new book is typically free of any faults or defects,...[more]
quarto
The term quarto is used to describe a page or book size. A printed sheet is made with four pages of text on each side, and the...[more]
wrappers
The paper covering on the outside of a paperback.  Also see the entry for pictorial wraps, color illustrated coverings for...[more]