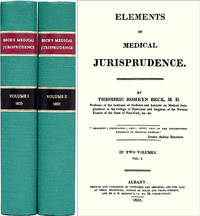 1000 Copies Available from This Seller

(You can add more at checkout.)
Item Price
$125.00
Or just with a
Bibliophiles club membership
$8.50 Shipping to USA
Standard delivery: 1 to 8 days
More Shipping Options

1997. ISBN-13: 9781886363243; ISBN-10: 1886363242. Beck, Theodric Romeyn. Elements of Medical Jurisprudence. Originally published: Albany: Websters and Skinners, 1823. 2 Vols. xxxiv, 418; viii, [9]-471 pp. Reprinted 1997 by The Lawbook Exchange, Ltd. ISBN-13: 9781886363243; ISBN-10: 1886363242. Smythe sewn green cloth hardcover, with red and black gilt spine labels. New. $125. * Reprint of the very uncommon first edition. Beck's treatise was the first significant American work on forensic medicine. Embracing "all that is really useful either to the physician or the lawyer," Beck's work supplanted both Smith's Principles of Forensic Medicine (1821) and Paris and Fonblanque's Medical Jurisprudence (1823) as the preeminent text in the English language. Beck graduated from the New York College of Physicians and Surgeons in 1811, and his work became an authority when the field was in its earliest stages. In volume one, Beck treats feigned and disqualifying diseases, impotence and sterility, doubtful sex, rape, pregnancy, delivery, infanticide (contributed by his brother, Dr. John Beck), legitimacy, survivorship, age and identity, and mental alienation; volume two examines persons found dead, wounds, and poisons, whether mineral, vegetable or animal. At the beginning of the work is a useful bibliography of texts consulted by Beck. Indexed.

New
A new book is a book previously not circulated to a buyer. Although a new book is typically free of any faults or defects, "new"... [More]
First Edition
In book collecting, the first edition is the earliest published form of a book. A book may have more than one first edition in... [More]
reprint
Any printing of a book which follows the original edition. By definition, a reprint is not a first edition.
Cloth
"Cloth-bound" generally refers to a hardcover book with cloth covering the outside of the book covers. The cloth is stretched... [More]
spine
The outer portion of a book which covers the actual binding. The spine usually faces outward when a book is placed on a shelf.... [More]
gilt
The decorative application of gold or gold coloring to a portion of a book on the spine, edges of the text block, or an inlay in... [More]