Shop Now
Home B & B Rare Books, Ltd., ABAA Elia: Essays Which Have Appeared Under That Signature in… 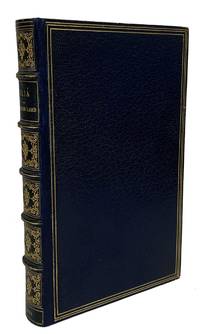 Elia: Essays Which Have Appeared Under That Signature in the London Magazine

Elia: Essays Which Have Appeared Under That Signature in the London Magazine

London: Printed for Taylor and Hessey, 1823 First edition, first issue, published without the half-title, with the publisher's single-line Fleet Street address to the tile page, lacking publisher's terminal advertisements. Finely bound in full navy morocco, with five raised bands to the spine, decorative gilt stamping to the spine bands and compartments, spine lettered in gilt, boards ruled in gilt, all edges gilt, elaborate gilt turn-ins, maroon coated endpapers. Very good or better, with some light wear and rubbing to the extremities, a hint of toning to the spine, front hinge tender with some wear, front hinge repaired, bright and fresh pages. A clean copy of the scarce first issue in a lovely morocco binding. Elia is a collection of Lamb's popular essays, each of which was originally published in London Magazine. Specifically, it includes "The South-Sea House," "Christ's Hospital Five and Thirty Years Ago," "Dream-Children; A Reverie," and "Modern Gallantry," among others. Lamb, a long-time clerk for the British East India Company, began writing essays under the pseudonym "Elia," which he derived from a former colleague's surname. Lamb wrote in a colloquial and conversational style that made his essays beloved by his Edwardian and Victorian readers. Additionally, Lamb included many of his friends and family in his writing, loosely disguised by initials and pseudonyms. Mary Lamb, Charles' sister and co-author of the popular Tales from Shakespeare (1807), appears as "Cousin Bridget." This first collection of Lamb's essays was complemented with a second volume in 1833 entitled The Last Essays of Elia: Being a Sequel to Essays Published under that Name. Interestingly, while the American edition of the first collection, published by Carey, Lea, and Carey in Philadelphia, was preceded by this first British edition by five years, the American issue of the second collection preceded its British counterpart; less restricted by copyright laws in the United States, the American publishers were able to issue both Elia volumes simultaneously in 1828.. 1st Edition.. Hard Cover. Very Good.

~ All items are guaranteed as described. We recommend requesting pictures prior to purchasing. ~ Any items may be returned within seven days of receipt and in the same condition as originally sent. ~ We ship with FedEx, UPS and USPS. Please let us know if you prefer another shipping. ~ New York State are required to add 8.875% sales tax.

morocco
Morocco is a style of leather book binding that is usually made with goatskin, as it is durable and easy to dye. (see also...[more]
hinge
The portion of the book closest to the spine that allows the book to be opened and closed.
rubbing
Abrasion or wear to the surface. Usually used in reference to a book's boards or dust-jacket.
First Edition
In book collecting, the first edition is the earliest published form of a book. A book may have more than one first edition in...[more]
edges
The collective of the top, fore and bottom edges of the text block of the book, being that part of the edges of the pages of a...[more]
gilt
The decorative application of gold or gold coloring to a portion of a book on the spine, edges of the text block, or an inlay in...[more]
raised band(s)
Raised bands refer to the ridges that protrude slightly from the spine on leather bound books.  The bands are created...[more]
spine
The outer portion of a book which covers the actual binding. The spine usually faces outward when a book is placed on a shelf....[more]