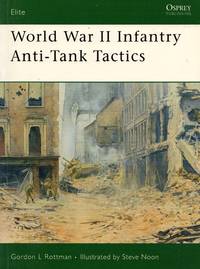 Botley, Oxford, UK: Osprey Publishing, 2005. 64 Pages with Black/White Photos and Colour Plates. The battlefield interaction between infantry and tanks was central to combat on most fronts in World War II. The first ‘Blitzkrieg' campaigns saw the tank achieve a new dominance. New infantry tactics and weapons - some of them desperately dangerous - had to be adopted, while the armies raced to develop more powerful anti-tank guns and new light weapons. By 1945, a new generation of revolutionary shoulder-fired AT weapons was in widespread use. This book explains in detail the shifting patterns of anti-tank combat, illustrated with photographs, diagrams and colour plates showing how weapons were actually employed on the battlefield.. First Edition. Soft Cover. Good/No Jacket. Illus. by Noon, Steve.

jacket
Sometimes used as another term for dust jacket, a protective and often decorative wrapper, usually made of paper which wraps...[more]
First Edition
In book collecting, the first edition is the earliest published form of a book. A book may have more than one first edition in...[more]
New
A new book is a book previously not circulated to a buyer. Although a new book is typically free of any faults or defects,...[more]