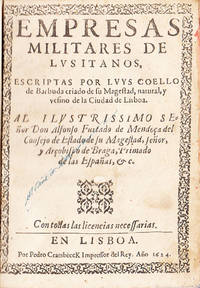 Lisbon: Pedro Craesbeeck, 1624. Recent vellum over boards, spine gilt. F. 102, frequently lacking, in facsimile. F. 161 misnumbered 145. Title p. slightly soiled, small hole repaired just touching printed surface, last line of f. 91 verso & f. 94 recto poorly printed, very small wormhole in upper margin of ff. 125-150, small marginal repairs to ff. 28 & 112, 134-187 & 189-223, some occasional slight spotting and staining, very occasional marginalia.. The author, a Portuguese member of the royal household, was born in Lisbon in the sixteenth century; and, though forced to accept the sovereignty of the Spanish King, he very evidently retained his love of his native country and its national heroes. He explained in his preface to the archbishop of Braga, to whom the book is dedicated, that his work is intended to be a more lasting monument to the heroes of his nation than the statues with which the Greeks formerly honoured their great; and to this end, he has written his work in Spanish, so that it might find a wider field of appreciation than if he had written it in Portuguese. Though written with a touch of pride for the exploits of the Lusitanians, the writers attitude towards Portugals enemies is fair and unprejudiced (Maggs, Spanish Books, 245). Palau 56169. Innocêncio V, 280 & XVI, 9. Palha 2767, ouvrage rare et estimé. Borba de Moraes I, 76. Garcia Perez 41, libro estimable y que es poco vulgar. Bernstein, Pedro Craesbeeck & sons, 17th century publishers to Portugal & Brazil, 244.

Seller rating:
This seller has earned a 5 of 5 Stars rating from Biblio customers.
Biblio.com member since 2014
LONDON, London
Ask Seller a Question

verso
The page bound on the left side of a book, opposite to the recto page.
vellum
Vellum is a sheet of specialty prepared skin of lamb, calf, or goat kid used for binding a book or for printing and writing. ... [More]
facsimile
An exact copy of an original work. In books, it refers to a copy or reproduction, as accurate as possible, of an original... [More]
marginalia
Marginalia, in brief, are notes written in the margins, or beside the text of a book by a previous owner. This is very... [More]
soiled
Generally refers to minor discoloration or staining.
recto
The page on the right side of a book, with the term Verso used to describe the page on the left side.
Fair
is a worn book that has complete text pages (including those with maps or plates) but may lack endpapers, half-title, etc.... [More]
spine
The outer portion of a book which covers the actual binding. The spine usually faces outward when a book is placed on a shelf.... [More]
gilt
The decorative application of gold or gold coloring to a portion of a book on the spine, edges of the text block, or an inlay in... [More]