Rare books Law More Rare Books from The Lawbook Exchange Ltd The English Lawyer, Describing A Method for the Managing of the Lawes 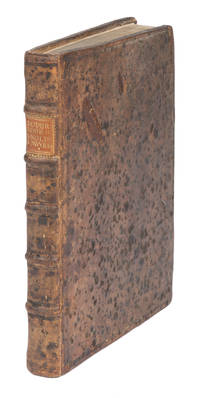 The English Lawyer, Describing A Method for the Managing of the Lawes

The English Lawyer, Describing A Method for the Managing of the Lawes

1631. London, 1631. Sole edition. London, 1631. Sole edition. Advice for the Seventeenth-Century English Law Student Doddridge, Sir John [1555-1628]. The English Lawyer. Describing a Method for the Managing of the Lawes of this Land. And Expressing the Best Qualities Requisite in the Student, Practizer, Judges and Fathers of the Same. London: Printed by the Assignes of I. More Esq, 1631. [viii], 271, [1] pp. Quarto (7" x 5-1/4"). Contemporary mottled calf, raised bands, blind fillets and lettering piece to spine, blind tooling to board edges. Light rubbing to extremities, a few shallow scuffs to boards, pastedowns lacking. Light toning to text, somewhat heavier in places, light soiling to title page, finger smudges and other marks to a few leaves, annotations in contemporary hand to endleaves, which are somewhat soiled. A handsome copy. $2,500. * Only edition. Doddridge wrote this book to advise law students. Among other points, such as suggested readings and advice concerning personal demeanor, he urges the student to acquire a solid liberal-arts education that emphasizes subjects with practical application, such as logic and etymology. Regarding the specifics of legal education, he discusses the best methods of study and information on the sources and principles of English law. Holdsworth said it was the "most notable" book of its kind. As distinguished a jurist as Coke and Bacon, Doddridge was a counselor of the King's Bench, a Serjeant for Prince Henry, Solicitor-General, a Member of Parliament and the author of five important works, all published posthumously. Holdsworth, A History of English Law V:397-398. English Short-Title Catalogue S109764.

calf
Calf or calf hide is a common form of leather binding.  Calf binding is naturally a light brown but there are ways to treat...[more]
edges
The collective of the top, fore and bottom edges of the text block of the book, being that part of the edges of the pages of a...[more]
title page
A page at the front of a book which may contain the title of the book, any subtitles, the authors, contributors, editors, the...[more]
raised band(s)
Raised bands refer to the ridges that protrude slightly from the spine on leather bound books.  The bands are created...[more]
quarto
The term quarto is used to describe a page or book size. A printed sheet is made with four pages of text on each side, and the...[more]
rubbing
Abrasion or wear to the surface. Usually used in reference to a book's boards or dust-jacket.
spine
The outer portion of a book which covers the actual binding. The spine usually faces outward when a book is placed on a shelf....[more]
soiled
Generally refers to minor discoloration or staining.
leaves
Very generally, "leaves" refers to the pages of a book, as in the common phrase, "loose-leaf pages." A leaf is a single sheet...[more]