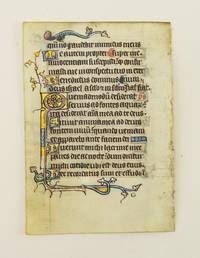 FROM AN ENGLISH PSALTER IN LATIN

FROM AN ENGLISH PSALTER IN LATIN

7 Copies Available from This Seller

England, 14th century. 110 x 77 mm. (4 1/4 x 3"). Single column, 16 lines in an English gothic book hand. Rubrics in red, paragraph marks in red or blue, each leaf with multiple one-line initials in gilt on pink or blue ground, line-enders with gold bezants on a bar painted pink and/or blue, many with at least one two-line initial in pink or blue on gilt ground with painted decorative flourishes, SOME WITH A TWO-LINE INITIAL INHABITED BY A HUMAN FACE, with half or three-quarter borders on one or both sides, composed of either straight bars or long, spikey tendrils in gold, pink, and blue and terminating in leaves and trefoils, SEVERAL LEAVES WITH AN ANIMAL OR FANCIFUL HYBRID CREATURE INCORPORATED INTO THE BORDERS OR INHABITING THE MARGINS. With later ink foliation in upper corners, some leaves with emendations in a slightly darker ink. Vellum with a little general soiling and toning, margins trimmed rather close and sometimes just cutting into the borders, gilt noticeably rubbed away in places (exposing white gesso layer), paint occasionally rubbed or smudged, other small, mostly marginal blemishes and stains, but despite these signs of use, the leaves still very charming and with a considerable degree of their original appeal. From a small Psalter intended for personal contemplation, these leaves feature a pleasing English scribal hand and strong decorative program. The leaves in this price range contain some especially delightful examples of hybrid creatures and in one case, a small animal, often cleverly incorporated into the borders; others contain a human face peering out from an initial, as if playing hide-and-seek with the viewer. In addition to these whimsical embellishments, our leaves are also appealing as good examples of English paleography, and meant to be attractively priced. For additional leaves at different price points, please check our website.

gilt
The decorative application of gold or gold coloring to a portion of a book on the spine, edges of the text block, or an inlay in...[more]
vellum
Vellum is a sheet of specialty prepared skin of lamb, calf, or goat kid used for binding a book or for printing and writing. ...[more]
leaves
Very generally, "leaves" refers to the pages of a book, as in the common phrase, "loose-leaf pages." A leaf is a single sheet...[more]