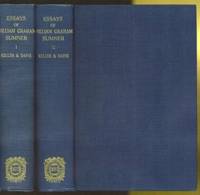 2 volumes. xix+499 pages with frontispiece; viii+534 pages with frontispiece, bibliography and index. Octavo (9" x 6 1/4") bound in original publisher's blue cloth with gilt lettering to spine. Edited with prefaces by Allbert Galloway Keller and Maurice R Davie. First edition. William Graham Sumner was an American academic and professor at Yale College. For many years he had a reputation as one of the most influential teachers there. He was a polymath with numerous books and essays on American history, economic history, political theory, sociology, and anthropology. His popular essays gave him a wide audience for his laissez-faire: advocacy of free markets, anti-imperialism, and the gold standard. He was a president of American Sociological Association from 1908 to 1909. Born in Paterson, New Jersey, he graduated from Yale College in 1863, where he had been a member of Skull & Bones. Later he was appointed to the newly created Chair of Political and Social Science at Yale. As a sociologist, his major accomplishments were developing the concepts of diffusion, folkways, and ethnocentrism. Sumner's work with folkways led him to conclude that attempts at government-mandated reform were useless. He was a staunch advocate of laissez-faire economics. Sumner was active in the intellectual promotion of free-trade classical liberalism, and in his heyday and after there were Sumner Clubs here and there. He heavily criticized socialism/communism. One adversary he mentioned by name was Edward Bellamy, whose national variant of socialism was set forth in Looking Backward (1888), and the sequel Equality. Like many classical liberals at the time, including Edward Atkinson, Moorfield Storey, and Grover Cleveland, Sumner opposed the Spanish American War and the subsequent U.S. effort to quell the insurgency in the Philippines. He was a vice president of the Anti-Imperialist League which had been formed after the war to oppose the annexation of territories. In his speech "The Conquest of the United States by Spain," he lambasted imperialism as a betrayal of the best traditions, principles, and interests of the American People and contrary to America's own founding as a state of equals, where justice and law "were to reign in the midst of simplicity." According to Sumner, imperialism would enthrone a new group of "plutocrats," or businesspeople who depended on government subsidies and contracts. In the 1870s Sumner was strongly influenced by the English evolutionary thinker Herbert Spencer; after 1885 or so Spencer's influence faded. Among Sumner's students were the anthropologist Albert Galloway Keller, the economist Irving Fisher, and the champion of an anthropological approach to economics, Thorstein Bunde Veblen. Condition: A former library copy with the only library indication on the titles verso at the foot of the page else a very nice set.. First Edition. Original Cloth. Very Good/ . Octavo.

verso
The page bound on the left side of a book, opposite to the recto page.
octavo
Another of the terms referring to page or book size, octavo refers to a standard printer's sheet folded four times, producing...[more]
New
A new book is a book previously not circulated to a buyer. Although a new book is typically free of any faults or defects,...[more]
gilt
The decorative application of gold or gold coloring to a portion of a book on the spine, edges of the text block, or an inlay in...[more]
First Edition
In book collecting, the first edition is the earliest published form of a book. A book may have more than one first edition in...[more]
spine
The outer portion of a book which covers the actual binding. The spine usually faces outward when a book is placed on a shelf....[more]
Cloth
"Cloth-bound" generally refers to a hardcover book with cloth covering the outside of the book covers. The cloth is stretched...[more]