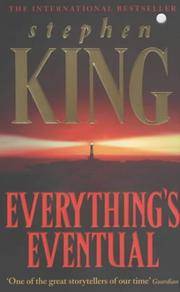 Hodder & Stoughton. Used - Good. Ships from the UK. Used book that is in clean, average condition without any missing pages.

The first collection of stories Stephen King has published since Nightmares & Dreamscapes nine years ago, Everything's Eventual includes one O. Henry Prize winner, two other award winners, four stories published by The New Yorker, and "Riding the Bullet," King's original e-book, which attracted over half a million online readers and became the most famous short story of the decade. "Riding the Bullet," published here on paper for the first time, is the story of Alan Parker, who's hitchhiking to see his dying mother but takes the wrong ride, farther than he ever intended. In "Lunch at the Gotham Café," a sparring couple's contentious lunch turns very, very bloody when the maître d' gets out of sorts. "1408," the audio story in print for the first time, is about a successful writer whose specialty is "Ten Nights in Ten Haunted Graveyards" or "Ten Nights in Ten Haunted Houses," and though Room 1408 at the Dolphin Hotel doesn't kill him, he won't be writing about ghosts anymore. And in "That Feeling, You Can Only Say What It Is In French," terror is déjà vu at 16,000 feet. Whether writing about encounters with the dead, the near dead, or about the mundane dreads of life, from quitting smoking to yard sales, Stephen King is at the top of his form in the fourteen dark tales assembled in Everything's Eventual. Intense, eerie, and instantly com-pelling, they announce the stunningly fertile imagination of perhaps the greatest storyteller of our time.

30 day return guarantee, with full refund including shipping cost for up to 30 days after delivery if an item arrives misdescribed or damaged. Please keep in mind that because we deal mostly in used books, any extra components, such as CDs or access codes, are usually not included. CDs: If the book does include a CD, it will be noted in the book's description ("With CD!"). Otherwise, there is no CD included, even if the term is used in the book's title. Access Codes: Unless the book is described as "New," please assume that the book does *not* have an access code.

Seller rating:
This seller has earned a 5 of 5 Stars rating from Biblio customers.
Biblio.com member since 2009
Dunfermline, Fife
Ask Seller a Question

Better World Books generates funding for literacy charities through the sales of second-hand books. Our current partner charities in the UK are READ International, the National Literacy Trust, Room to Read. (Registered Charities no. 1128534, no. 1116260 and no. 1125803 and the National Adult Literacy Agency. Much of our stock is ex-library due to our close relationships with UK libraries. We offer a service that helps them keep their unwanted books out of landfill. All ex-library books will be marked as such in their individual listings. 99% of orders are dispatched within 24 hours and we offer a 100% money back guarantee if you are not completely satisfied.