Home Katz Fine Manuscripts Inc. Evocative 1940s Archive of Letters and Ephemera from a Member of the Black Watch (Royal Highland Regiment) of… 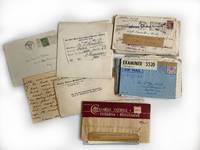 Quebec, France, Scotland. Good+ with no dust jacket. 1942. Hardcover. On offer is an outstanding collection of beautifully written letters and ephemera from a Canadian World War II soldier who served as a member of the Black Watch, one Canada's great front-line regiments. The archive belongs to Sergeant Macgregor Roulston, and includes more than twenty engrossing and detailed wartime letters, telegrams, and pieces of air mail. Most of the letters are written between Roulston and his wife, Elsie. Several letters are to Elsie from her brother Norman Mathieson, and one is to Roulston from his mother. Roulston was born in 1918 and grew up in Lancaster, Ontario. This small community is in the heart of a region that was heavily settled by Scottish immigrants and ex-soldiers of Highland regiments prior to Canadian Confederation. At age 19, Roulston joined the local army unit, the Glengarry Highlanders. He later moved to Montreal and joined the Royal Highland Regiment of Canada, better known as the Black Watch. In 1939, Roulston's regiment was mobilized and Roulston became a recruit instructor. He transferred to Europe after the regiment's terrible losses at Dieppe. In November 1943 he writes to his wife Elsie from Scotland, saying, "And now I suppose I better tell you some 'interesting' news. Before I left on leave the company commander got me in before him and said that C. M. H. Q. Had been looking over my papers and wanted to know if I would be interested in taking my commission. Boy! Did I ever say YES! I will have to do a lot of studying and I know that my educational qualifications are not too high. It is what I have been praying about and God willing I will get it alright." Roulston eventually took part in the Normandy landings. His regiment was involved in some thirty battles across northern Europe. In a July 1944 letter to Elsie labelled "Somewhere in France," Roulston's words vividly and eloquently describe life on the frontlines: "As I sit here with my helmet on beside my trench I can hear the occasional explosion in the distance. The boys are either shaving or cleaning weapons. Some are huddled up here and there sleeping on the ground. Not very far off there is the remains of a few houses and a pub. Last night you could see the boys staggering back here with pails of French cider . . . As you might expect the place is now out of bounds . . . Well, Sweetheart, I want you to know that I love you very very much and that I am just waiting to get this over til I get back to you. You mean everything to me Sweetheart. All my love." Eight days following this letter, Roulston's regiment took part in the Battle of Verrières Ridge. Three hundred and twenty-five soldiers in the Black Watch mounted a controversial attack, which resulted in all but 10 soldiers suffering injury, capture, or death. Roulston was wounded and taken to a prison camp, and was not released until September 1944 when Patton's 3rd Army liberated large parts of France, Belgium, and the Netherlands. In August of 1944, Elsie's brother Norm, who was also a soldier in the war, wrote to her from a hospital: "How is everything going kid. I haven’t heard from you in almost two weeks. In fact it will be two weeks tomorrow. Have you had any further news on Mac. You sure must be worried, but keep your chin up, and I’m sure everything will turn out O. K." These letters from Roulston and his family bring history to life, and offer a vivid, affecting glimpse of the excitement, loneliness, boredom, fear, and heartache at home and on the frontlines during the Second World War. Another item of interest included in this collection is a two-hole 10.25-by-8-inch binder of handwritten army notes on lined paper that cover topics such as personal hygiene, first aid treatment for gas, bren gun operations (including hand drawings of action) , and theory of small arms fire. Under "Methods of Judging Distance" there are nearly three pages of notes showing how a rifleman can estimate distance to a target. Tucked into the binder are a number of newspaper clippings pertaining to a fire that razed the Roulstons' church in Montreal, MacVicar Memorial Presbyterian. There is also a MacVicar Memorial Presbyterian Church Welcome Home Dinner invitation addressed to Mr. And Mrs. Roulston, and two programs from the dinner. This is an outstanding archive of primary-source material from World War II. It puts a very human face on the experience of war from the perspective of those fighting as well as those waiting at home. It also provides valuable information regarding what was taught to those in the Canadian Army at the time. ; Letters; 10.25" x 8"; 120 pages; Keywords: Macgregor Roulston; Norman Mathieson; Elsa Roulston; Royal Highland Regiment of Canada; Black Watch; Glengarry Highlanders; Verrieres Ridge; Montreal; Huntingdon Basic Training Camp; Canada; MacVicar Memorial Presbyterian Church; World War II; Second World War; WWII; HANDWRITTEN; MANUSCRIPT; DOCUMENT; LETTER; AUTOGRAPH; WRITER; HAND WRITTEN; DOCUMENTS; SIGNED; LETTERS; MANUSCRIPTS; DIARY; DIARIES; JOURNALS; PERSONAL HISTORY; SOCIAL HISTORY; HISTORICAL; HOLOGRAPH; WRITERS; AUTOGRAPHS; PERSONAL; MEMOIR; MEMORIAL; ANTIQUITÉ, CONTRAT; VÉLIN; DOCUMENT; MANUSCRIT; PAPIER ANTIKE; BRIEF; PERGAMENT; DOKUMENT; MANUSKRIPT; PAPIER OGGETTO D'ANTIQUARIATO; ATTO; VELINA; DOCUMENTO; MANOSCRITTO; CARTA ANTIGÜEDAD; HECHO; VITELA; DOCUMENTO; MANUSCRITO; PAPEL .

All items are guaranteed as stated for life or returnable for refund.

Seller rating:
This seller has earned a 5 of 5 Stars rating from Biblio customers.
Biblio.com member since 2009
Cochrane, Alberta
Ask Seller a Question

Katz Fine Manuscripts Inc. (formerly M. Benjamin Katz Fine Books/Rare Manuscripts) is based out of both Ontario and Alberta, Canada. We do business by appointment, and have had an online presence selling fine books and rare manuscripts since 1999. Specializing in handwritten, historically significant books, manuscripts, diaries, documents and ephemera. A member of The Manuscript Societyï¿½each treasure on offer is guaranteed authentic and as represented for life. Worldwide clientele includes esteemed collections and public, private and university libraries on both sides of the Atlantic and Pacific. Always buying collections and estates.Katz Fine Manuscripts Inc.ï¿½has been an online sales and auction presence with over 7000 transactions since 1999.

jacket
Sometimes used as another term for dust jacket, a protective and often decorative wrapper, usually made of paper which wraps... [More]
good+
A term used to denote a condition a slight grade better than Good.
pub
Common abbreviation for 'published'