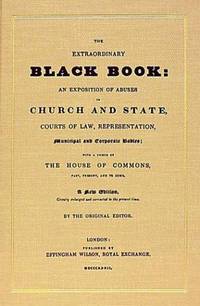 The Extraordinary Black Book: An Exposition of Abuses Church State..

The Extraordinary Black Book: An Exposition of Abuses Church State..

2004. ISBN-13: 9781584773627; ISBN-10: 1584773626. Wade, John, [Compiler and Editor]. The Extraordinary Black Book: An Exposition of Abuses in Church and State, Courts of Law, Representation, Municipal and Corporate Bodies; With a Precis of the House of Commons, Past, Present, and to Come. A New Edition, Greatly Enlarged and Corrected to the Present Time, by the Original Editor. London: Published by Effingham Wilson, 1832. xxxii, 683 pp. Reprinted 2004 by The Lawbook Exchange, Ltd. LCCN 2003052768. ISBN 1-58477-362-6. Cloth. A slightly bumped copy. $35. * Reprint of the final revised and expanded edition. Especially significant because it had a direct influence on legislation, this "Bible of the Reformers" is a model of investigatory pamphleteering in the cause of representative democracy. The long struggle to transform Great Britain into a modern state was effected primarily through the gradual expansion of the electorate, which was accomplished though the Reform Acts of the nineteenth and twentieth centuries. In the earlier era, as the growth of industry shook the traditional agrarian economy dominated by the landholding aristocracy, the accompanying campaign to transform government by weaning power from traditional loci was conducted through a mass of books, pamphlets and other printed matter. The Extraordinary Black Book, which went through several editions between 1820 and 1832, was the most important of these. As the editor explained: "government has been a corporation, and had the same interests and the same principles of action as monopolists. It has been supported by other corporations; the Church has been one, the Agriculturists another, the Boroughs a third, the East-India Company a fourth, and the Bank of England a fifth: all these, and interests like these, constituted the citadel and out-works of its strength, and the first object of each has been to shun investigation. We have, however, rent the vail..." (Advertisement to the New Edition, iv-v). Printing and the Mind of Man calls this "a massive compendium of all the abuses, electoral, ecclesiastical, legal which they sought to abolish" 1967:180.

New
A new book is a book previously not circulated to a buyer. Although a new book is typically free of any faults or defects,... [More]
Cloth
"Cloth-bound" generally refers to a hardcover book with cloth covering the outside of the book covers. The cloth is stretched... [More]
reprint
Any printing of a book which follows the original edition. By definition, a reprint is not a first edition.