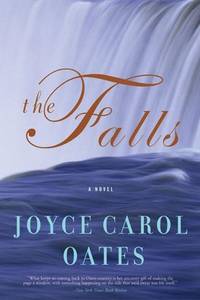 The Falls: A Novel

The Falls: A Novel

A stunning, major achievement from Joyce Carol Oates, "one of the great artistic forces of our time" (The Nation). A haunting story of the powerful spell Niagara Falls casts upon two generations of a family, leading to tragedy, love, loss, and, ultimately, redemption.A man climbs over the railings and plunges into Niagara Falls. A newlywed, he has left behind his wife, Ariah Erskine, in the honeymoon suite the morning after their wedding. "The Widow Bride of The Falls," as Ariah comes to be known, begins a relentless, seven-day vigil in the mist, waiting for his body to be found. At her side throughout, confirmed bachelor and pillar of the community Dirk Burnaby is unexpectedly transfixed by the strange, otherworldly gaze of this plain, strange woman, falling in love with her though they barely exchange a word. What follows is their passionate love affair, marriage, and children -- a seemingly perfect existence.But the tragedy by which their life together began shadows them, damaging their idyll with distrust, greed, and even murder. What unfurls is a drama of parents and their children; of secrets and sins; of lawsuits, murder, and, eventually, redemption. As Ariah's children learn that their past is enmeshed with a hushed-up scandal involving radioactive waste, they must confront not only their personal history but America's murky past: the despoiling of the landscape, and the corruption and greed of the massive industrial expansion of the 1950s and 1960s.Set against the mythic-historic backdrop of Niagara Falls, Joyce Carol Oates explores the American family in crisis, but also America itself in the mid-twentieth century. As in We Were the Mulvaneys, a "darkly engrossing novel" (Washington Post Book World), she examines what happens when the richly interwoven relationships of parents and their children are challenged by circumstances outside the family.The Falls is a love story gone wrong and righted, and it alone places Joyce Carol Oates definitively in the company of the great American novelists.

RETURNS are cheerfully accepted up to 30 days. We ship out within 1-2 business days and U.S. Standard Shipments usually arrive within 6-9 business days, Priority 3-6.

Seller rating:
This seller has earned a 4 of 5 Stars rating from Biblio customers.
Biblio.com member since 2003
Frederick, Maryland
Ask Seller a Question

jacket
Sometimes used as another term for dust jacket, a protective and often decorative wrapper, usually made of paper which wraps... [More]