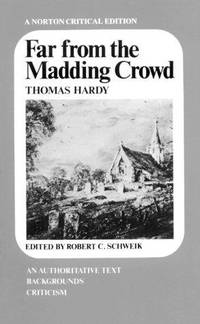 Far From the Madding Crowd, (A Norton Critical Edition)

Far From the Madding Crowd, (A Norton Critical Edition)

500 Copies Available from This Seller

W.W. Norton & Company/Viva Books, 2010. First edition. Softcover. New. This Norton Critical Edition is based on the 1912 Wessex edition, emended to correct errors which have crept into the text from the manuscript onward. It also incorporates revisions that Hardy made in his ""study copy"" of the novel and in his marked printerâ€™s copy and page proofs for the Harper and Brothers ""sixpenny edition"" of 1901, whenever these revisions can be confidently be judged to represent Hardyâ€™s final deliberate intention. The resulting text includes revisions by Hardy which have never appeared before in a modern edition. The novel is fully annotated and is accompanied by Hardyâ€™s map of Wessex and a simplified map of the landscape of Far from the Madding Crowd. ""Textual Notes"" include a list of emendations, examples of variant readings from the manuscript to the Wessex edition, and a discussion of the choice of copy text. The textual history of the novel is traced in extracts from studies by Richard Little Purdy and Simon Gatrell. ""Backgrounds"" includes substantial extracts from Hardyâ€™s correspondence with Leslie Stephen and is followed by a selection of contemporary reviews. Twentieth-century ""Criticism"" is represented by Howard Babb, Roy Morrell, Alan Friedman, J. Hillis Miller, Michael Millgate, Penelope Vigar, Peter J. Casagrande, Ian Gregor, and Albert C. Schweik. Contents: The Text of Far from the Madding Crowd â€¢ Contents â€¢ Preface â€¢ Far From the Madding Crowd â€¢ Textual Notes â€¢ Robert C. Schweik and Michael Piret-(Choosing a copy-text: The problem of Hardyâ€™s Manuscript accidentals) â€¢ Backgrounds â€¢ Hardyâ€™s Map of Wesses - Simplified map of the country of Far from the Madding Crowd â€¢ F.E. Hardy - From the Life of Thomas Hardy, 1840-1928 â€¢ Michael Millgate - Puddletown into Weatherbury the Genesis of Wesses â€¢ Hardyâ€™s Correspondence with Leslie Stephen â€¢ Richard Little Purdy - (The Manuscript and Notes on composition and publication) â€¢ Simon Gatrell - (The Significance of Hardyâ€™s Revision) â€¢ Criticism: (R.H. Hutton) - From The Spectator, January 3, 1874 from The Athenaeum, December 5, 1874 â€¢ Henry James - From the Nation, December 24, 1874 â€¢ Andrew Lang - From the Academy, January 2, 1875 (R. Wise) - From the Westminister Review, â€¢ Howard Babb - Setting and Theme in Far from the Madding Crowd â€¢ Roy Morrell - (Romance versus Realism) â€¢ Alan Friedman - (Innocence, Expansion, and Containment) J. Hillâ€™s Miller - (Point of View) â€¢ Michael Millgate - (Hardyâ€™s Achievement) â€¢ Penelope Vigar - (a distinct Development in artistic Vision) â€¢ Robert C. Schweik - (Hardyâ€™s Shifting Narrative Modes) â€¢ Peter J. Casagrande - a New View of Bathsheba Everdene â€¢ Ian Gregor - (Hardyâ€™s Use of Dramatic Pace) â€¢ Selected bibliography Printed Pages: 496.

Seller rating:
This seller has earned a 4 of 5 Stars rating from Biblio customers.
Biblio.com member since 2010
New Delhi
Ask Seller a Question

First Edition
In book collecting, the first edition is the earliest published form of a book. A book may have more than one first edition in... [More]
New
A new book is a book previously not circulated to a buyer. Although a new book is typically free of any faults or defects, "new"... [More]